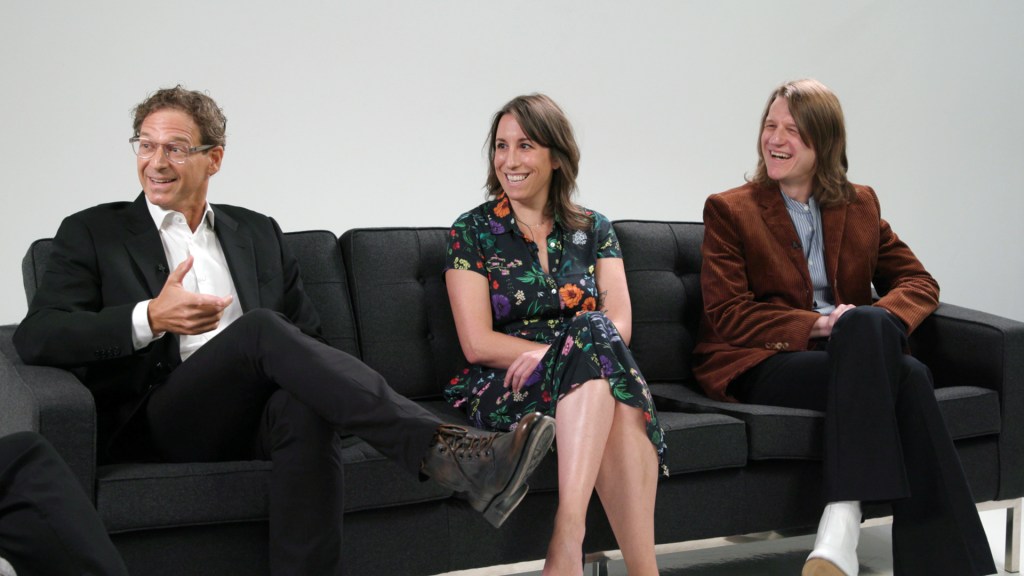 When “Yellowjackets” premiered on Showtime last fall, the show — about a girls’ soccer team trying to survive in the wilderness in 1996 after a plane crash, and the aftermath of that crash 25 years later — activated the internet in a specific and intense way. Theories on Reddit abounded, and since “Yellowjackets” had presented its high-school-aged characters as cannibals in its pilot episode, nothing seemed off limits.

In an interview at the Variety studio earlier this month, “Yellowjackets” creators Ashley Lyle and Bart Nickerson, along with co-showrunner Jonathan Lisco, talked about the experience of being on the receiving end of all of that theorizing. “It was surreal,” Lyle said. “You hope that people will watch the show and respond to the show, but the level of passion and enthusiasm that the fans of the show were just bringing to the table was astounding. It was a little mind blowing.”

And then there was the fact that sometimes a fan theory, even the out-there ones, would turn out to be correct. “When all those people are saying something about the show, somebody is going to be right,” Lisco said. “It was really interesting how the audience predicted certain things that we either did in the show, or that we noodled in the writers’ room and dispensed with.”

One of those times — as Lisco, Nickerson and Lyle revealed during the conversation, which was filmed for Variety’s Showrunners Sitdown With Kate Aurthur presented by FX — was the Reddit detectives’ conspiracy theories about the character of Adam (Peter Gadiot), with whom Shauna (Melanie Lynskey) has an affair in the show’s 2021 timeline.

When asked what viewers had guessed that the showrunners were the most surprised by, Lisco said: “I can tell you something that they guessed that we chose not to do, which is about Adam.” He then turned to Lyle and Nickerson, and said, “Can I tell them? Or shall we tell them?”

“I think that you just did,” Lyle said with a laugh.

Emboldened, Lisco went on. “Well, we did entertain the notion that Adam was basically Javi coming back to torment Shauna in a way, or torment the Yellowjackets,” he said. “We fairly early on dispensed with that idea. It did not feel organically right to us. It didn’t feel to deliver on the promise of what we actually wanted to dramatize with her affair and their marriage.

“We chose not to, but some people called it and were, I think, eager to see it happen. Then it creates the scenario where, ‘Well, did we disappoint those people or did we delight them?’”

For the uninitiated “Yellowjackets” reader, that would have meant that Javi (Luciano Leroux), the little brother of Travis in the 1996 timeline, would have grown up to have it out for the surviving Yellowjackets. Instead, though, the showrunners went with what ended up onscreen, which was Adam just being a guy who was falling in love with Shauna. A guy whom she stabbed to death because she thought he was blackmailing the survivors, this being “Yellowjackets.”

“It felt infinitely more tragic to us,” Lyle said. “It being Javi come back is fun in a way, but it feels a little mustache-twirly, which is not necessarily the place we want to go.”

The Season 1 finale in January certainly answered plenty of questions the show had set up, including who was actually blackmailing the Yellowjackets (Shauna’s cash-strapped husband Jeff, played by Warren Kole), what happened to Jackie (she froze to death after an extremely run-of-the-mill frenemy fight with Shauna) and who the terrifying antler queen in the pilot was (Lottie, played by Courtney Eaton). It also introduced more mysteries, which will play out as “Yellowjackets” continues: The second season will go into production in late August.

But the showrunners have made a promise. “We, as a show, won’t tease the audience with things,” Nickerson said. “I hate that as a viewer.”

To that end, Nickerson, Lyle and Lisco answered all our questions — about whether we’ll learn more about Shauna’s baby, the man who lived in the cabin, Jackie’s journal and many more — even when they seemed reluctant to spoil.

“I’ve never stared off into space more during an interview,” Lisco said. “My eyes are searching distant landscapes for the answer to whether or not we should —”

“— answer,” Lyle finished for him.