A Lebanese musician featured on a 2022 FIFA World Cup anthem with Nicki Minaj and Maluma wore blackface three years ago.

Myriam Fares, who joined Minaj and Maluma on “Tukoh Taka” Friday for a verse in Arabic, faced backlash in 2018 after significantly darkening her face and body’s skin for one of her music videos. She was also criticized for appropriating Imazighen culture earlier this year.

The controversial visual for her song “Goumi” (or “Stand Up”) opens with Fares singing from within a jungle — and surrounded by people in seemingly tribal clothing — as she dances to the song’s beat in her natural skin tone.

But two-and-a-half minutes into the video, Fares re-appears in a gold dress and earrings with her skin tone significantly darkened as she poses and dances in front of a white backdrop while singing in Arabic, “You made everyone crazy about you/All the beauty around the world and henna on your hands.”

By the end of the visual, the camera zooms out of Fares’ upper body and face — still painted dark brown.

Fares’ management team did not immediately respond to Rolling Stone‘s request for comment about the controversy. 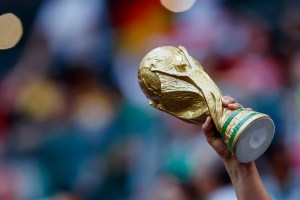 Despite some backlash it faced on Twitter immediately after the video’s release, the video’s director Sherif Tarhini — who has continued to work with Fares since “Goumi” — captioned a clip from the visual, “Let’s shake it à la Africano!” in early 2019.

At the time of the video’s release, Arabic-language outlets and Twitter users criticized Fares for appropriating African culture and engaging in blackface.

An article published by Mille World, an English-language outlet focused on the Arab world, published an op-ed from an unnamed writer, who criticized Fares, a non-Black Arab person, for engaging in “a practice that’s deeply rooted in insulting and degrading Black people.”

“At no point should it be accepted for a non-black Arab to paint their skin black or appropriate Black culture,” the critic wrote. “Certainly not whilst racism runs rampant in most countries, and certainly not whilst the Arabic word for ‘slave’ is still used interchangeably with ‘black.’”

As of Nov. 21, the video for “Gouma” continues to be up on Fares’ YouTube page.

The controversies surrounding Fares continued earlier this year, as she was called out by for appropriating the culture of Amazigh people in Instagram videos as she encouraged fans to “prepare your own ‘Imazighen look,’” referring to the ethnic culture of North Africa.

“Our culture isn’t your aesthetic!” wrote one user. “This is so disrespectful of Amazighs, using us as props like that.”

“This is not an exotic quirky tattoo,” added another, quote-tweeting Fares’ video. “My grandmas were both forced to have them at a very young age for protection and tribal reasons.”

The criticism came months before Fares was announced as one of the musicians to be featured on the soundtrack for the 2022 FIFA World Cup. (Other artists participating in the musical festivities for the tournament include Jung Kook, Ozuna, and GIMS.)

Over the weekend, Fares was joined by Maluma on stage in Qatar as the two sang “Tukoh Taka” at the World Cup’s fan festival. The performance with Maluma came after the Colombian star walked out of an interview after being asked about Qatar’s human rights record.

“It’s something I can’t resolve. I just came here to enjoy life, enjoy soccer and the party of soccer. It’s not something that I actually have to be involved with,” Maluma said, before walking out of the televised interview and calling the reporter “rude.”

Since FIFA chose Qatar as the 2022 host country in 2010, concerns have continued to grow over the abuse of migrant workers, who make up 90 percent of the workforce and who have been key to the labor needed to constructed these temporary lodgings.

A reported 6,500 migrant workers have died since Qatar was awarded host country status, according to a recent investigation by Rolling Stone.

Representatives for Maluma and Nicki Minaj did not immediately respond to Rolling Stone‘s requests for comment.