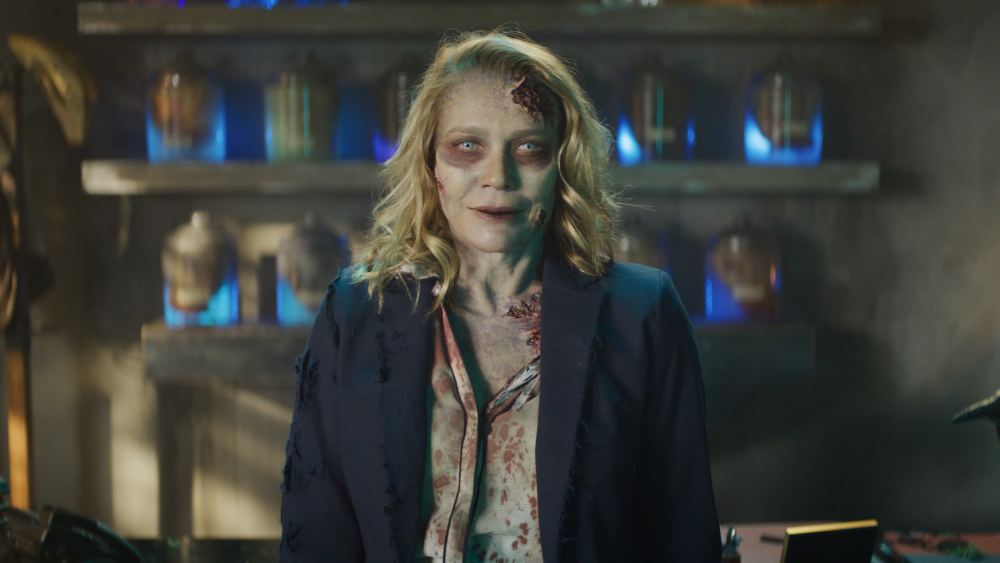 Killing off someone in the AMC series “The Walking Dead” is tough. Doing so often requires striking a violent blow to the brain. On Sunday, the task became even more complex, thanks to a little help from Madison Avenue.

Four old characters from the series’ more than 177 episodes returned Sunday night, but not during the episode — the last in the dystopian program’s original 11-season run. Instead, viewers saw cameos from four old characters, all brought to life by the original actors who portrayed them during bespoke commercials from advertisers who haven’t been among the series’ top sponsors.

In one spot, from Amazon’s Ring, Gareth, a former enemy of the Walking Dead heroes, tries to fend off solicitors at his doo. “I would literally rather die — again,” he tells viewers. In another, Andrea, once a cast regular played by Laurie Holden, tells those watching how consulting firm Deloitte collects “the biggest, brightest, juiciest brains” to help clients take on “their meatiest challenges.” Both characters appear in the form they were in when they departed the series: dead (but eager to speak about the products they have been assigned to tout).

“Ads can still be talked about and fun,” says George Dewey, co-founder of Maximum Effort, the upstart ad agency that is controlled in part by actor Ryan Reynolds and packaged the advertisers and commercials in Sunday night’s finale. “It just takes a lot more work.” DoorDash, Autodesk and MNTN, an ad-tech company that includes Reynolds on its senior management team, have also joined in the effort.

TV networks typically don’t like to cede control of their ad inventory to third parties. Such an idea has been pitched for years by media agencies seeking to “program” commercial breaks in ways that might keep viewers from tuning away when their favorite program is interrupted. In the case of the “Walking Dead” finale, Maximum Effort executives believed the event would drive conversation, and wanted to find a way to get some of its clients involved in the chatter.

The agency approached AMC a few months ago, according to Kim Granito, an AMC executive vice president who oversees integrated marketing and the company’s Content Room studio. Maximum Effort has “managed to creatively tap into what has made this show so meaningful over the past decade,” she says, in an interview. “Fans are going to freak out when they see this creative.”

Some of the marketers might have done the same. Maximum Effort, which completed the ads just days ago, shot all the spots over a compressed two-day period, says Dewey. Clients who couldn’t adapt to the schedule would not be able to take part. Maximum Effort has developed a reputation for coming up  with ad concepts that play off trending popular culture. To make them work, the agency needs to devise them quickly, a concept Dewey calls “fastvertising.” Move too slowly, he says, and the ads will lose their tie to what’s relevant and of the moment. For the “Dead” ads, “each client would get three or four hours of shooting,” he says.

AMC has sought at least $200,000 for a 30-second, spot according to a person familiar with the matter. That may represent a comedown from the series’ heyday — a 30-second commercial in the series went for more than half a million in 2015 — but it’s well above the average price for the same amount of ad time in recent end-of-cycle episodes. In 2021 and 2020, the average cost of a 30-second ad in finale episodes of “Walking Dead” has hovered around $100,000, according to Standard Media Index, a tracker of ad spending.

Maximum Effort’s plan is bringing unusual advertisers to the “Walking Dead” roster. Top sponsors of the series in 2021 and 2020 were Apple, Capital One, Geico, Samsung and Rocket Mortgage, according to Kantar, a tracker of advertising expenditures. Marketers put $37.9 million behind the series in 2021, Kantar estimates.

Deloitte has not relied heavily on TV advertising in the past but saw the “Dead” finale as an opportunity “to introduce ourselves to people who may not know who we are and what we do,” says Suzanne Kounkel, the company’s chief marketing officer, in an interview. Deloitte hopes the edgy but fun spot will signal to job-seekers that the company is on the lookout for a range of different employees and will be tracking whether the commercial spurs them to apply. The company found out about the opportunity, she says, through a relationship it’s had with Reynolds in another venture.

The unique ad ploy in the series finale is just the latest ad twist served up by “Walking Dead.” For years, the show has tried to work with advertisers even as it held many of their requests at bay. Because the series takes place in an era when a plague that turns people into zombies has eroded most hallmarks of civilization, producers have hesitated to allow advertisers to embed their products into the show itself.

And yet, AMC has welcomed marketers like Microsoft that crafted ads with zombie themes in them that were crafted just for an appearance in the series. And on occasion, producers have even been able to weave advertisers’ products into the plot, as they did with a kiwi-green Hyundai Tucson or a bottle of PepsiCo’s Mountain Dew.

Advertisers willing to “lean into the nature of the show, have typically found rewards, says Granito. On Sunday, they got to raise the dead — if only for a moment.

Facebook
Twitter
Pinterest
LinkedIn
Email
2022-11-21
Previous Post: ‘The Walking Dead’ Finale: Everything You Need to Know About How It Ended, Surprise Cameos and What’s Next With the Spinoffs
Next Post: ‘The White Lotus’ Star Will Sharpe Explains Ethan and Cameron’s ‘Toxic’ Friendship and Theo James’ Improvised Cheek Kisses