Bethesda has created a custom Xbox Series S console themed around The Elder Scrolls Online to promote the launch of the MMO’s High Isle expansion on console this week.

Bethesda ANZ, the division that handles Australia and New Zealand, teamed up with Australian customizer We Are Robots to create a console design themed around The Ascendant Lord’s armor. We Are Robots also created a themed controller and stereo headset. You can see the items in the gallery below.

According to Bethesda, the menacing and ominous color scheme is meant to match The Ascendant Lord’s “dark and mysterious demeanor.” The console and the controller also feature the sigil of The Order. “On both units, the sigil is surrounded by the ornate lines and decoration of his dark steel armor,” Bethesda said.

The headset, meanwhile, has the ouroboros logo, which is meant to symbolize the three factions in ESO coming together for peace talks in High Isle.

This ESO console is just the latest unique creation to come out of ANZ. Earlier this week, Microsoft teamed up with an Australian sweets company to create an Xbox Series S made entirely out of sugar. Beyond that, a YouTuber recently created a refrigerator-sized Xbox Series X that actually works.

The High Isle expansion for ESO launched June 6 on PC and came to console on June 21. In addition to a new area, the expansion adds an in-universe card game called Tales of Tribute, featuring The Lord of the Rings actor Billy Boyd.

For more on High Isle–which finally lets you pet the cat–check out GameSpot’s rundown on ESO’s High Isle, including the story, content, and everything else we know.

In other Bethesda news, the publisher recently shared more information about two of its biggest upcoming games, Redfall and Starfield, as part of the Xbox/Bethesda summer showcase. 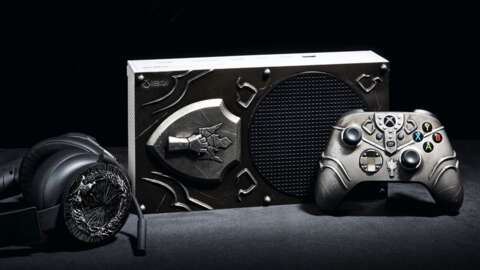