Since Season of Plunder began in Destiny 2, most Guardians have been experimenting with the new Arc 3.0 subclass and utilizing it to deliver lightning-fast strikes. For Titans, the Arc subclass options has transformed Guardians into deadly human missiles who can close gaps quickly and lob some of the most powerful grenades of the season.

But don’t sleep on the Solar subclass, because that scorching selection of powers is better than ever right now. It all boils down to Consecration, a Solar Aspect that transforms the Titan melee attack into a powerful sliding uppercut. A two-pronged attack, activating a powered melee during a slide will unleash a wave of Solar energy that damages and scorches any enemies caught in its path. You can grab the DIM link here, if you want to experiment with this loadout.

From there, players will be briefly airborne and can use the charged melee again to slam down to the ground and create a second wave of powerful Solar energy. If a target is already afflicted with Scorch stacks, this second attack will make them ignite. With the right Fragments and armor mods, Consecration becomes a self-sustaining attack that deals massive amounts of damage and can even be used to deliver killing blows to Champions in Destiny 2.

The Sol Invictus Aspect will also keep you alive long enough to deliver these explosive slams, as that will generate Sunspots that will keep you alive and kickstart your healing. You’ll also want the following four Fragments:

For your armor, you’ll be looking at these particular mods to slot into place:

This combo will ideally have you in a constant cycle of Radiant and Charged With Light during battle, amplifying your power and restoring your subclass abilities after you use them. You’re pretty much free to use whichever grenade and melee attack you want, so long as you remember to scorch targets so that Consecration can turn them into bombs. Heavy-Handed actually works properly with Consecration now, giving you half your melee energy back after each attack. With Solar well littered on the ground, you can grab them to help refuel your Titan for the next slam attack. It creates plenty of firepower all the time, and you’ll be healing up in the sunspots you create.

For your Exotic, there are two great items here. Synthoceps is a straightforward option that rewards players who dive straight into the thick of battle. Biotic Enhancements will drastically increase your melee attack strength by 200% when you’re surrounded by enemies and has an eight-second duration that will be resetting all the time because of the aggressive approach this build promotes.

Wormgod Caress is also viable, as each melee kill generates a stack of Burning Fists that multiplies your damage to an absurd level. At a maximum of five stacks, you’re looking at a 650% melee damage increase, although that buff only lasts for five seconds. Timing is everything with Wormgod Caress, but if used properly, you can clear a path with the first part of Consecration’s attack, grab Burning Fists from defeating cannon fodder enemies, and unleash a killing blow on the boss in front of you. Toss in a Solar weapon with an Incandescent perk, and you’ll be spreading those explosive scorch stacks in no time at all.

When it works, the Consecration Clobber build is a fun return to Solar 3.0 for Titan players. It’s explosive, you can spam the area of effect scorch ability, and there’s nothing more thrilling than slamming down to the ground with a pair of hammers and taking out Champions that usually give you a hard time. For more Destiny 2: The Witch Queen builds, check out GameSpot’s Warlock Thunder God and Titan Thunder-Bomber guides. 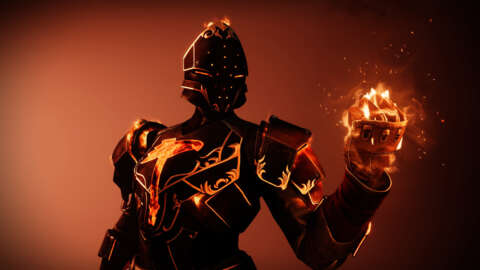