The Smile Reinterpret Radiohead’s Past With Stripped-Down Sound and Driving Songs: Concert Review 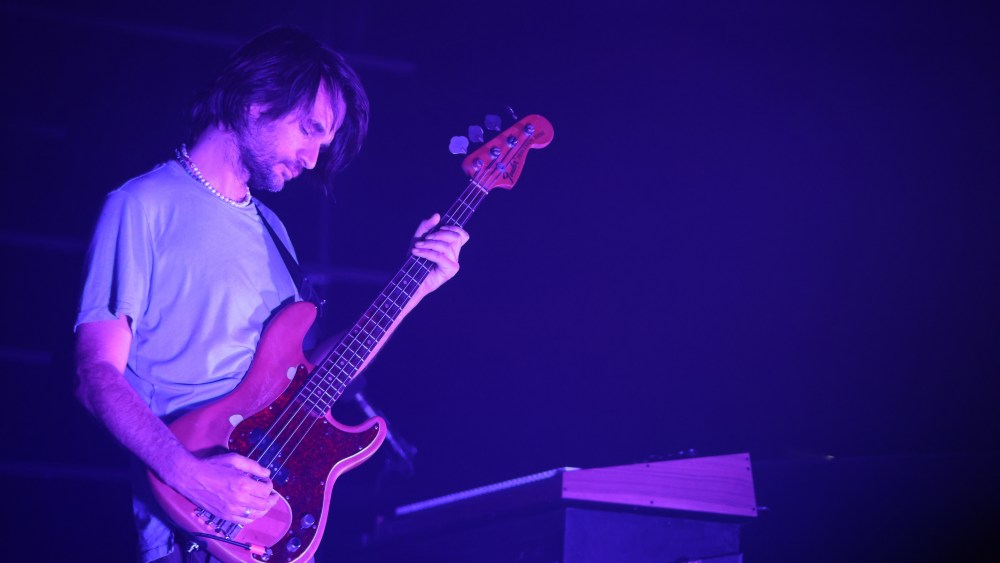 Although they’re both ’90s alt-rock bands with enduring fanbases, there’s a world of difference between Radiohead and Weezer. While each new Radiohead album delivers challenging musical left turns that dazzle critics and add depth to their catalogue, Weezer has been eternally chasing the past. Their legacy was cemented by two classic ’90s albums, followed by decades of lesser material which engages fans but always falls behind their past glory. Fittingly, “In the Garage,” from their self-titled 1994 album, is a statement of purpose that has been guiding them ever since: What if we were only ever kids, shredding in our parent’s house, pretending we were in Kiss?

But what if it was Radiohead chasing the past, practicing their rawk faces in the mirror, ditching complex compositions for hard rock licks? The answer can be found in the Smile, a band formed during the pandemic by the most public-facing members of Radiohead, singer Thom Yorke and lead guitarist and musical wizard Jonny Greenwood. Drummer Tom Skinner backs the duo, and although the group is nearly half the size of Radiohead, their debut album “A Light for Attracting Attention” causes a racket, blending the primal power of axe-heavy Radiohead albums (think “The Bends” blended with “In Rainbows”) with the songwriting precision of post-punk sprinkled with the experimentation of Greenwood’s solo compositions. But even though “Attention” is one of the best of the group’s strongest side projects, it wouldn’t be mistaken for 2022 Radiohead.

After touring the summer in Europe, the Smile have arrived to America on their first tour, and their Nov. 20 stop at New York City’s Hammerstein Ballroom cemented their status as an adventurous live act carving a far different niche outside of Radiohead’s enormous shadow.

After starting with the throbby, synth-heavy “Attention” opener “The Same,” the trio quickly got in their standard operating mode, with Yorke and Greenwood trading off bass duties while the other tackled lead guitar or keys. Second song “Thin Thing” was one of the more aggressive moments of the night, with Greenwood’s staccato guitar picking in conversation with Skinner’s drum parts. The percussionist was the wild card of the night for Radiohead fans, who have grown accustomed to Philip Selway’s playing. Skinner’s style feels much different: a funky, light touch that stubbornly kept time during Yorke and Greenwood’s most adventurous sections. His phrasing also added another touch of musicality to the proceedings, appropriate for a trio aiming for a dense sound.

Highlights included the piano ballad “Pana-vision,” which devolved into a noisy outro, complete with Greenwood attacking his electric bass with a bow; “Bending Hectic,” an experimental and extended jam which could live alongside “A Thousand Leaves”-era Sonic Youth; the slinky, minimalist “The Smoke”; and set-closer “You Will Never Work in Television Again,” a rousing, pissed-off rocker, aided by frantic saxophone courtesy of show opener Robert Stillman.

The Smile also returned for a freewheeling encore, consisting of two unreleased tracks and the relatively rare Yorke solo cut “Feeling Pulled Apart by Horses.” Although the songs weren’t well known, they kicked up the lightest section of the night, signaled by notorious dancer Yorke cutting a rug all over the stage.

Credit the audio engineers who kept the show crisp as both Yorke and Greenwood fiddled endlessly with vocal distortion, switched pedals, changed synths mid-song and occasionally plucked a harp. All of the songs sounded lush, full and balanced, with Yorke’s ageless falsetto floating above the mix.

At one point, Yorke specified that “We’re a new band,” a wink to the countless Radiohead T-shirts in the crowd. But given their enthusiasm in playing new songs, as well as the fact that more than a third of the set was devoted to unreleased material getting worked out onstage, it’s clear the Smile is more than a pandemic hobby.