Taylor Swift Sweeps 2022 AMAs With Six of Six Wins, Thanks Fans for ‘My Happiness’

AMAs (Taylor’s Version), for sure! Taylor Swift completely dominated the 2022 American Music Awards Sunday night, as she took home all six of the awards she was nominated for, including Artist of the Year.

“In the past few years, I have released more music than I did in the entire decade preceding that. And I really feel like that’s down to the fact that you the fans made it clear that you wanted to hear lots of music that I would make,” Swift said as she accepted the major award for the seventh time in her career. “I found that the more music I made and the more music I put out, the happier I was — the more I just kept that channel open and just kept creating, kept making things. And the more that happened, the more you guys were like, ‘Yay, keep doing it.’”

She added, “I have the fans to thank, essentially, for my happiness. I love you more than I can say. I cannot express how unbelievable it is to me that I still get to do this and that you still care. So thank you, underlined with 13 exclamation points. I don’t know what to say.”

Swift was nominated against the likes of Adele, Bad Bunny, Beyoncé, Drake, Harry Styles, and the Weeknd. Prior to being awarded with the Artist prize, she accepted the trophy for Favorite Music Video for “All Too Well: The Short Film,” which starred Sadie Sink and Dylan O’Brien. 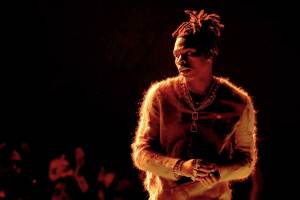 She added: “The people who helped me make this, I really want to say, and I will say this forever: Sadie Sink And Dylan O’Brien, thank you so much for trusting me as a director with your immense, incredible talent.”

Earlier in the night, she won the award for Favorite Pop Album for Red (Taylor’s Version). “I can’t thank you enough for caring about this album that I’m so proud of,” she said, thanking her co-producers and Chris Stapleton and Phoebe Bridgers, who were both featured on the LP. “This album is a re-recorded album and I cannot tell you how much my re-recorded albums mean to me, but I never expected or assumed that they would mean anything.”

She went on to thank Blake Lively — “my beautiful brilliant friend, my director” — who helmed direction for the “I Bet You Think About Me” video.

“And the incredible Miles Teller and his gorgeous wife Kelly Teller, for being in the music video,” she said. “I love you guys for making this a possibility for me. To the fans: I cannot thank you enough. This is so special.”

Last year, she took home awards for Favorite Female Pop Artist and Favorite Pop Album for Evermore. With this year’s six trophies, Swift extended her lead as the artist with the most awards, at 40.

The wins come after a low point for Swifties, as they complained about their “terrible experience” getting tickets for her The Eras Tour.

“I’m not going to make excuses for anyone because we asked them, multiple times, if they could handle this kind of demand and we were assured they could,” Swift said on Instagram. “It’s truly amazing that 2.4 million people got tickets, but it really pisses me off that lot of them feel like they went through several bear attacks to get them.”