Sutton Stracke is dishing with “Extra’s” Rachel Lindsay on “The Real Housewives of Beverly Hills” and her relationship status!

Rachel, a self-described “Real Housewives” fanatic, told her, “I put up on my social media that I was talking to you today and I was like, ‘Hey, anybody have questions for Sutton?’ and so much of what people had to say were just compliments.”

Stracke replied, “It’s so wonderful to get that back, because the show can be very tense.”

Tense indeed! Sutton got into some of her relationships with the women on the hit Bravo show.

Lindsay asked, “How are things with you and Diana [Jenkins]”

Sutton explained, “When we were at Kyle’s house she said we’ll take a time-out… I think she’s still in time-out, she hasn’t joined the game again. I’m waiting for the whistle to blow with her.”

And what about Erika Jayne?

“We just have this thing where we can be in the same room,” Sutton said. “She makes me laugh sometimes. We’re not friends, but we respect one another.”

That led Rachel to ask, “What did you think when Erika told Garcelle you’re a liability?”

“There’s irony in that statement, so that’s what I’ll say about that,” Sutton replied.

With the latest teaser showing Lisa Rinna going off on her, Sutton said, “These women feel like they can just yell at me all the time. It was Lisa’s turn to yell at me.”

So how does she feel when the women come down on her? “I give my opinion freely… and some of you don’t like it.”

We do like seeing Sutton back on the dating scene after breaking up with her boyfriend Michael! 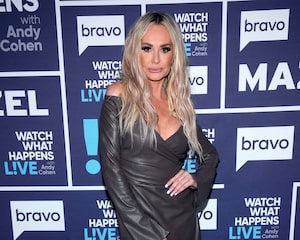 The star explained she does want to find someone to spend her life with after COVID. “I was alone… To be sick like I was and to really not have anybody, I was like, ‘Okay, this is what my life is going to be like if I don’t actively pursue trying to find someone, a partner to join me in this next part of my journey.’”

She revealed she is still looking, saying, “I’m still dating, I’m still on the apps… I’m a Virgo, so I’m very picky and I also see it on the show. I’m kind of awkward at times, so it’s going to take a very special person, and I go hard and I go fast.”

Lindsay commented, “You just sound like a lady who knows what she wants, and there’s nothing wrong with that. Have the ladies set you up with anyone?”

Sutton shared, “They have not set me up with anyone,” but said “yes” she would be open to that!

As far as returning to “RHOBH” next season, Stracke said she will, “If they want me, because I don’t feel like I’m finished.”

In the latest installment of the Green Room, Remi Wolf talks about how sobriety influenced her approach to music-making