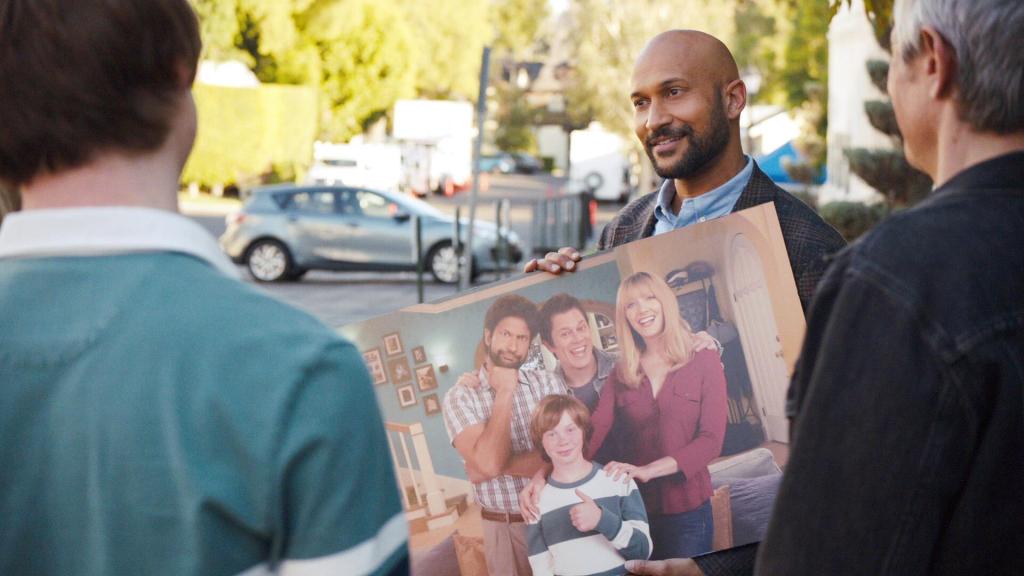 Steven Levitan is a veteran of the American sitcom, starting his career on long-running multi-cam “Wings,” creating NBC’s “Just Shoot Me!,” and co-parenting “Modern Family,” which won the Emmy for outstanding comedy series five years in a row.

On his latest project, however, Levitan looks at the sitcom through a different lens. “Reboot,” on Hulu, follows the cast of fictional early-aughts sitcom “Step Right Up” reuniting when, yes, Hulu decides to reboot it. There’s Reed (Keegan-Michael Key), pretentious capital A actor who never got his big break; Bree (Judy Greer), who returns from a small Nordic country after a royal divorce; Clay (Johnny Knoxville), a filthy stand-up comedian who can’t stay out of trouble; and Zack (Calum Worthy), a child actor who never really grew up. Meanwhile, the veteran comedy writers of the original show clash with the young, politically correct writers also on board, and the original show’s creator is forced to compromise with a new showrunner, whose claim to fame is an indie film called “Cunt Saw.”

Ahead of the series’ three-episode premiere, Levitan sat down with Variety to discuss the meta nature of “Reboot,” how its onscreen writers’ room compares to those actually in Hollywood and whether he’d consider reviving “Modern Family.”

Hulu is basically a character in the show. Was it always the idea to have the network airing “Reboot” also be the network in the show, rebooting the fictional sitcom “Step Right Up”?

Every aspect of this show I tried to make as authentic as possible. So I didn’t want to create some fake streaming service that just immediately takes you out of it. Wherever we went, it was always my plan to try to use that place [in the show].

Was there any friction or pushback from Hulu about your representation of the streamer in the show?

Zero. They’ve been fantastic partners on this. There was one time — I wouldn’t even call it pushback — where I had some very technical language in there about them talking about demographics, and it was absurd. And they said, “No, we wouldn’t say it like this, we would say it like this,” and it was even more absurd. So they have been great sports. They find those scenes really funny. I often kid them that they like the show, and part of the reason why is because they think that the network executives are the real heroes of this story. But they’ve been nothing but great about it.

How much did you develop the idea of “Step Right Up,” and did you write any full scripts of the fake sitcom?

No, I did not. That sitcom came about through reverse engineering. I knew I wanted to have these two male actors, a female actor and a former child actor. So I started with what would be the most interesting thing in the present day for me to work with. And then I kind of reverse engineered a sitcom out of that. So I thought of shows like “My Two Dads.” My first show was “Wings,” which had two main male leads and a female lead, and I think that was in my head a little bit. And then wanting to add a kid just seemed like a natural thing. And then, of course, once I had a father and a stepfather, I needed a really good pun name for the series. So it all came together quickly.

The show plays on Hollywood’s obsession with rebooting shows and recycling IP. What are your thoughts on the landscape of television right now? Are reboots a good thing or bad thing for creativity?

I think if you’re doing a reboot for the right reasons, it’s fine. If you have a new, creative, exciting take on something, it’s OK. If it just feels like a retread, and there’s nothing new about it, then maybe we can all try a little bit harder. I think everybody aims to make new, and there have been some really clever twists on old properties. I think we’re just living in an age where there’s so much product, there’s so many things to watch, there’s so many services that people are looking for a way to get some immediate audience recognition. I get it, but for me personally, I would rather try to find something new.

There’s a tension in the writers’ room of “Step Right Up” between the younger writers and the older, less filtered veteran ones who worked on the original. How prevalent is this dynamic in real Hollywood writers’ rooms today?

I think that’s something that’s been going on for a while. It’s a normal generational thing, and represents what’s happening in families everywhere. The parents might think it’s fine to joke about one thing and then that offends kids. Even older people who consider themselves to be quite liberal can find themselves running afoul of the boundaries of younger, more “woke” people. And I find that to be a very interesting conversation to have. It’s certainly very prevalent in our society right now. It’s seeped into politics. There’s a lot of concern that the pendulum has swung too far in many cases where somebody who never meant anything bad about something says one comment and loses their job. On the other hand, if we can improve as a society by being kinder to each other while still maintaining our sense of humor, wouldn’t that be a nice thing?

Does that make it harder to write a comedy now than it was when you started “Modern Family“?

It’s always hard to write a comedy. Are there missteps that well-meaning people could inadvertently make? Yes. The rules, or what’s considered to be acceptable, seem to be changing quite rapidly. And comedy is an art form that has always tried to push boundaries. So I just think that we always have to keep in mind a person’s intention. Is this coming from a mean-spirited place or is just simply a matter of taste and what somebody is used to? It’s an evolving process, and perhaps a learning moment for everyone.

Would you ever consider rebooting “Modern Family”?

I’m so grateful for “Modern Family.” It was a dream experience. I couldn’t love that cast more and all my years doing it — it exceeded all my wildest expectations. And I liked that it was of its time. We captured that moment in time, and I’m pretty happy with just that.