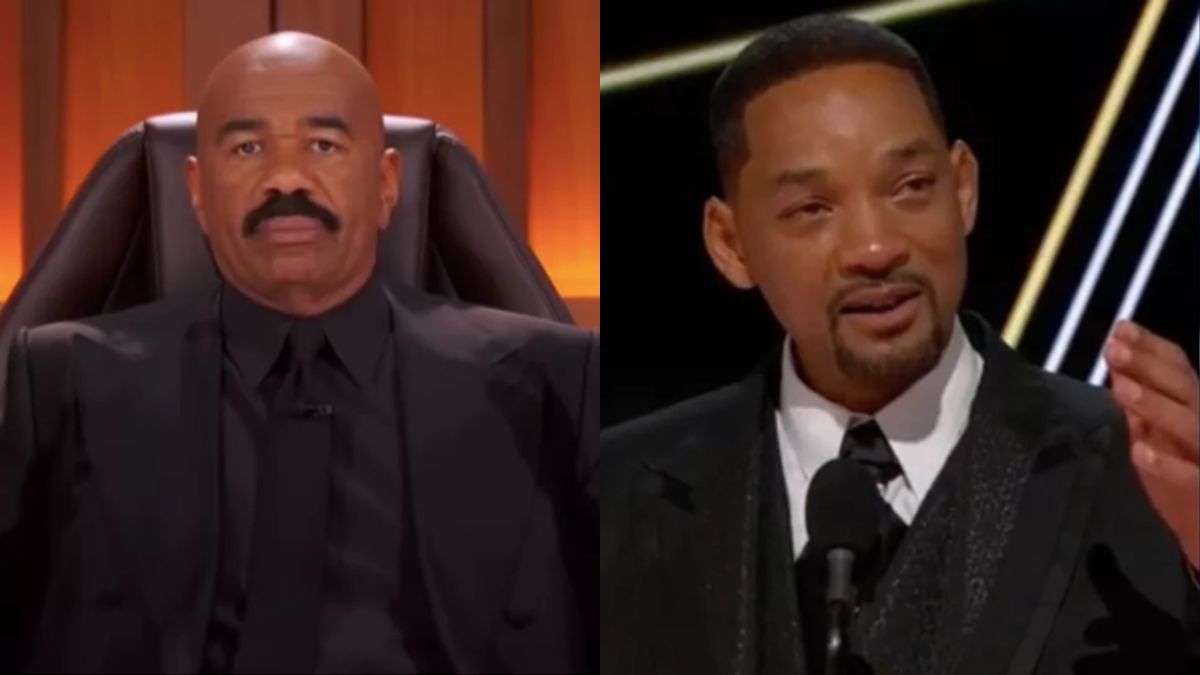 Steve Harvey and Will Smith can both relate to public backlash after a televised event went awry based on their actions. After Chris Rock made a joke about Jada Pinkett-Smith’s appearance at the 94th Academy Awards, Will Smith slapped him in front of the Academy and all of those watching. Harvey, who’s made errors himself on television with the mistaken Miss Universe winner fiasco, has shared his thoughts on what he thinks of Will Smith’s apology video to Chris Rock.

It’s been four months since the Oscars controversy occurred and Will Smith’s career has been facing many repercussions like resigning from the Academy, with two of his upcoming movies receiving setbacks and also being banned for ten years by the Academy. Steve Harvey shared on the Steve Harvey Morning Show podcast episode “Suge Smith’s Ripple Effect” about the public outrage that can come from one action seen by the masses.

The Family Feud host continued to say that Will Smith ruined the Oscars for a lot of people that night such as the executive producers, the hosts that would present for the rest of the night, and his own Oscar winning moment for Best Actor. Instead of focusing on the honors that everyone came home with that night, the slap was the moment everyone talked about more.

While the Fresh Prince of Bel-Air star has never faced public backlash before, Steve Harvey has been no stranger to it. He couldn’t help but bring up in his podcast the time he made a public error being the host of Miss Universe when he declared the wrong winner. He screwed up when he misread the card that he thought read Miss Colombia as the winner when she was really the runner-up. While this mistake did not stop him from continuing to host the beauty pageant competition, it was still a talked-about moment followed by roasts on Miss Universe the year after that and again was referenced when Tyra Banks made a similar live TV snafu while hosting Dancing With the Stars. Harvey continued to say on the podcast episode about how a controversial moment does not always escape you.

On the other hand, this 65-year-old comedian was brave enough to confront Miss Colombia a month after the incident where her crown and sash were snatched from her live on TV after it was revealed Miss Philippines was the real winner. Despite the humiliation she was still feeling about the incident, Harvey still brought her to his show and apologized to her. Even though it took Will Smith a lot longer to apologize to Chris Rock, the American television host did give him credit for not only apologizing in the video, but to his mother as well who had a strong reaction to what happened. He also felt it was a plus that Will Smith chose not to apologize on his wife’s talk show Red Table Talk and preferred the video to be personal with just him talking to the camera. Harvey understood why the Best Actor winner felt the need to go away to India on his spiritual journey away from the chaos that followed him.

Steve Harvey concluded his podcast episode by talking about the importance of bouncing back from controversy. That he is not the type to hold people to their mistakes as he’s made mistakes himself. While Chris Rock reportedly may not be ready just yet to confront the I, Robot star on being slapped, Steve Harvey forgave him as he would want the same treatment in return. For more updates on when we’ll see Will Smith back on the big screen, keep up with CinemaBlend’s new movie releases.