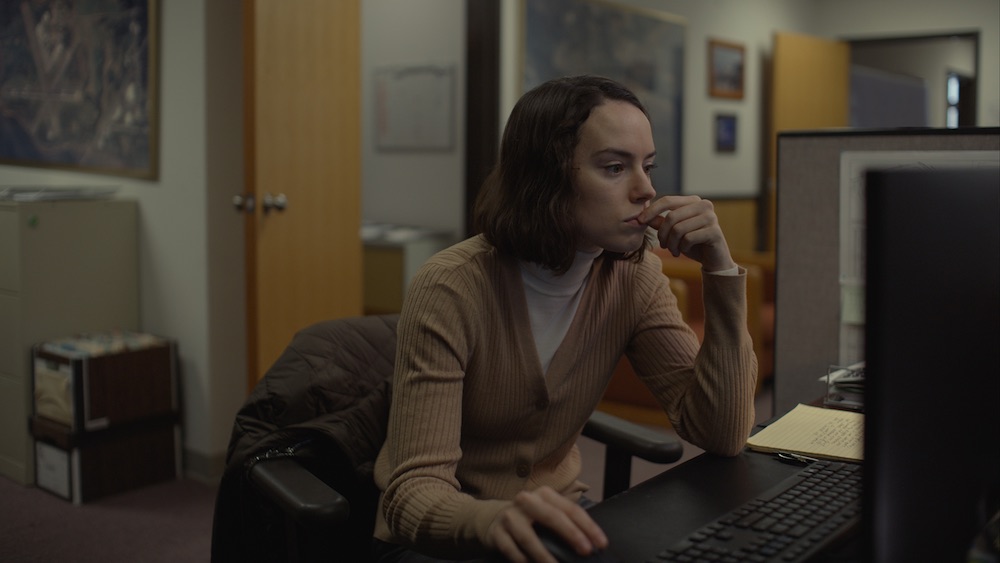 Most of the time, most people’s lives are pretty boring. Passing the day at the office, then coming home to do laundry and microwave dinner. Movies tend to cut these bits out, to focus on the escapist stuff, but every once in a while one comes along, searching for poetry in the mundane. From its confessional title, “Sometimes I Think About Dying” reveals that it will be about the interior life of a relatively private person, played by Daisy Ridley, who sits at her cubicle, imagining her body hanging from a nearby crane, or her corpse rotting on the forest floor.

Who’s to say what Ridley’s slump-shouldered, drably dressed character, Fran, is thinking about when her mind floats away? Director Rachel Lambert (whose delicate, Jeff Nichols-produced feature “In the Radiant City” demonstrated that she’s an artist of profound subtlety) doesn’t elaborate on whatever emotion is stirring behind Fran’s eyes, though she does at times depict her daydreams, presenting them as images more than complete thoughts. These scenes are unexpected, surreal, accompanied by a lovely, meditative string score from composer Dabney Morris. Fran doesn’t seem suicidal, but she isn’t particularly engaged in life either.

The movie puts a movie star where a personality ought to go, and such self-effacing blankness feels strange for Ridley to be drawn to. (The “Star Wars” actor also produced this feature-length adaptation of Stefanie Abel Horowitz’s 2019 short, which in turn was inspired by Kevin Armento’s play “Killers.”) Ridley approaches the character the way Daryl Hannah did the mermaid in “Splash,” the way Scarlett Johansson embodied the alien in “Under the Skin,” as if she’s uncomfortable being confined to a human body and doesn’t know how to interact with other people. But this is not science fiction. It’s a thin, practically anemic observational movie for audiences who recognize themselves in Fran’s awkwardness.

For those who don’t, “Sometimes I Think About Dying” gives you plenty of time to think about other things, like organizing your sock drawer, or ranking your favorite episodes of “The Office” (a show that felt like it was made by people who had worked in an actual office). This movie feels like an exercise in imagination by people who have never stepped foot in one, who think jokes about staplers and spreadsheets capture the soul-sucking ennui of such a job. But guess what: Lots of people work in offices, and not all of them waste that time twiddling their thumbs.

Hollywood (not really Hollywood, but the indie film community) tends to have a rather condescending view of those who pass their days at a desk. Occasionally they get it right, as in Alexander Payne’s “About Schmidt” or last year’s “Corner Office,” which featured Jon Hamm as a delusional office drone. Lambert doesn’t seem especially interested in such workspaces, but more in the kind of personality Fran represents: She knows there are people out there who don’t relate. Not to others, not to movies. Perhaps we’ve all felt this way at times, like there’s something wrong with us, outsiders in any social situation.

Fran feels that way as a likable co-worker named Carol (character actor Marcia Debonis, who nearly steals the movie from Ridley) readies for retirement. Fran can’t think what to write in the card going around the office. When Carol’s party comes, Fran stands in the back, takes a piece of cake and disappears — the office wallflower. (In the last shot of the movie, the break room appears to be filled with actual wallflowers, but they signify something else: a magical realist flourish that confirms something has come alive in this painfully shy young woman.)

Before that can happen, Carol’s departure creates an opening, which is instantly filled by a friendly enough guy named Robert (Dave Merheje), who shows an interest in Fran. He tries to make small talk, but Fran hates small talk. He invites her to a movie. Practically everything makes Fran uncomfortable — a condition Lambert presents with sympathy, though it can be frustrating for the audience, which is waiting for Fran to snap out of the zombie-like funk she’s in. The expression “would it kill you to smile?” seems to apply to Ridley’s character, as the movie waits for her to reconnect to others.

The two or three dates she shares with Robert are charming enough in their low-key way, although watching it all reminds me of an exercise I once gave a class full of graduate production students. I challenged them to do something that scared them, then to take what they learned and turn it into a story idea. One person told me that she had worked up the nerve to speak to the stranger sitting beside her on an airplane, and while that hardly seemed daring enough to fulfill the assignment, it taught me something: Not everyone is comfortable with even the most nonthreatening social interactions. “Sometimes I Think About Dying” is for those people, who recognize the courage in Fran’s baby steps toward living.