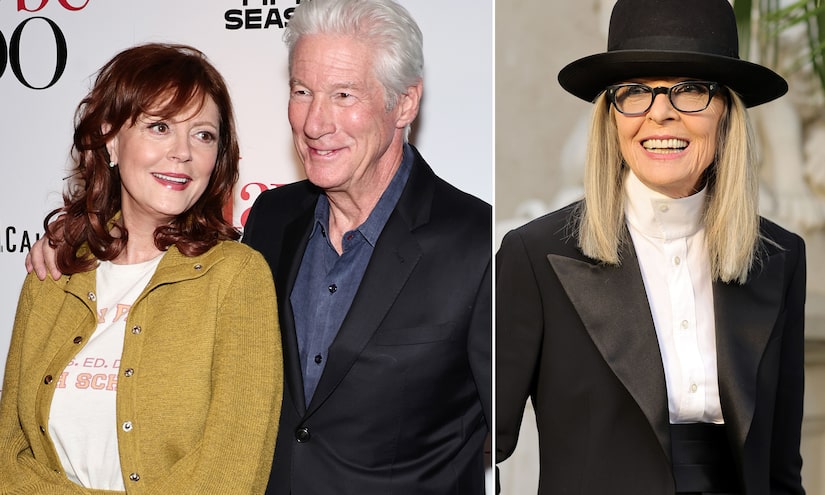 “Extra’s” Jenn Lahmers caught up with Richard, Susan and Diane to talk marriage, dating, and the movie.

The romantic comedy stars Emma Roberts and Luke Bracey as a couple ready to introduce their families. Little do they know, their parents have already met and had their own romantic entanglements.

Jenn told Richard and Susan, “Can I just give you two a compliment right off the bat? I mean this with total respect: I cannot think of two sexier people who’ve been sexy throughout their entire careers.”

Richard replied, “Wow,” joking, “How long is this interview? Can we give her a few more minutes.”

Those few minutes turned into a couples’ confessional!

The movie makes it clear that relationships are complicated, especially the longer you’re in them, so Jenn asked, “How can the two of you relate to those themes?”

Gere said, “Well, I’ve been married three times…” Susan interjected, “I did marry Chris Sarandon, but it was kind of a, ‘We’re going to renew it every year and then we didn’t.’ So it wasn’t quite the same.”

Richard went on, “There’s always two things are going on at the same time in any relationship is that you as an individual are still trying to figure out who you are, always.”

Sarandon added, “And what you want, what you need…” Richard continued, “And how do you share that with another person and does it fit…? The person that you are today was not the same person you were 50 years ago when the relationship started. They’re not the same person. You’re not the same people together. So it’s a constant checking in to see, ‘Does this work?’ And sometimes it doesn’t… You’ve gone in different directions and okay, you’re in different places and there’s not a reason to stay together anymore.”

Jenn commented, “People don’t take pleasure in the journey of it all.”

Susan said, “There you go. I wish I’d said that. Right on the T-shirt it’s going to go.”

For Richard and Diane, this was their first movie together since making the 1977 film “Looking for Mr. Goodbar.”

Diane revealed, “I had a crush on him, but he didn’t cotton to me at all… He was supposed to care about me in the movie,” she said with a laugh, “but he didn’t want it… He’s great, though. He was great.”

Diane also opened up about her own love life.

Lahmers said, “I read something Diane about you the other day and I refuse to believe it… How long has it been since you’ve gone on a date?

She teased, “Someday… someone will marry me… Maybe one of these nice men today who have to deal with me today.”

“Maybe I Do” premieres January 27.