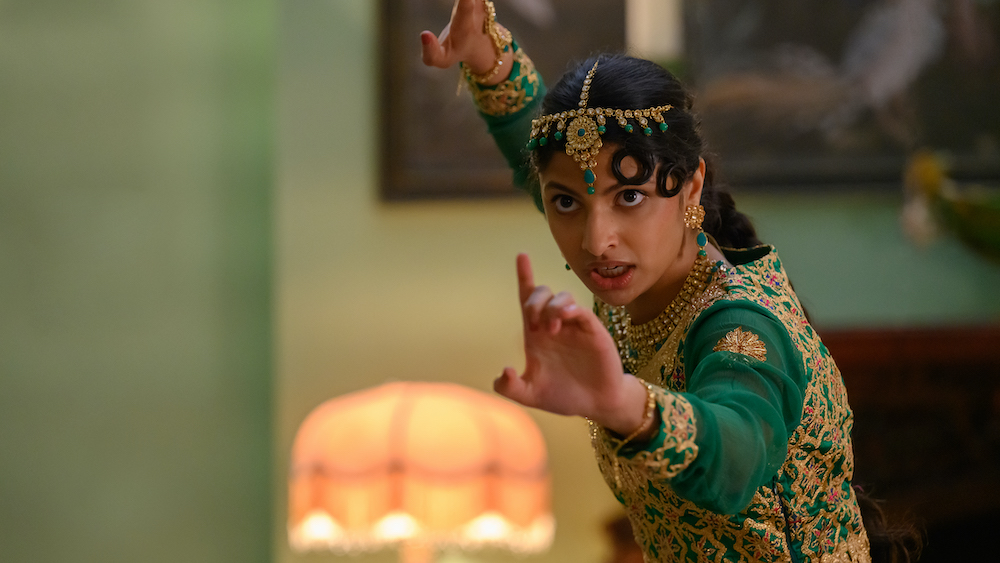 If “Polite Society” were a Jane Austen novel, a big wedding would be the happiest of endings, but in the eyes of the film’s feisty teenage protagonist, Ria Khan (Priya Kansara), watching her older sister Lena (Ritu Arya) trade her art career for a husband feels like Game Over. If Lena can’t make it as a painter, what hope is there for Ria, who dreams of becoming a stuntwoman? That’s the engine driving writer-director Nida Manzoor’s rowdy feature debut, which channels everything from Sergio Leone to “Scott Pilgrim vs. the World” in its wild and frequently outrageous route to sparing Lena the indignity of an (almost) arranged marriage.

Bringing irreverent pop culture mojo to a middle-class British South Asian family story, “Polite Society” packs much of the same appeal that made “Bend It Like Beckham” such a hit two decades earlier, plus a twist that brings some of that “Get Out” energy into the mix. “Beckham” may have made Keira Knightley a star, but it didn’t do much for the community: In the interval, shockingly few films have focused on the U.K.’s second-largest racial minority population — and none with the degree of personality Manzoor brings here.

The helmer comes to the task already fairly accomplished, having created the limited series “We Are Lady Parts” about a punk band made up of Muslim women. Here, her lead character is a 16-year-old girl of South Asian descent whose twin obsessions — karate and parkour — defy the cultural straitjacket her parents have in mind for her. Ria wants to make a career of martial arts, enlisting Lena to shoot demo videos for her YouTube channel and writing fan letters to personal idol Eunice Huthart, a stunt double on everything from “Tomb Raider” to “Star Wars.” What Ria doesn’t seem to realize is just how indulgent her parents (a great Shobu Kapoor and Jeff Mirza) have been so far.

When she and Lena are invited to an Eid ceremony hosted by one of London’s most eligible bachelors, Salim Shah (Akshay Khanna), Ria rolls her eyes and sneaks off to snoop around the house. She’s suspicious of such rituals and downright alarmed in the coming days to see Lena actually falling for this cad. Sure he’s gorgeous, fit and a brilliant doctor to boot — Salim saves babies, or something like that — with perfect teeth, a nice car and a posh mansion.

But Lena wants to be an artist, not a housewife! Or so Ria is convinced, a state of mind that Kansara — a natural who, believe it or not, has never had a lead role till now — plays with deliciously exaggerated indignance. Meanwhile, everyone around her seems pretty happy with where things are headed … to a wedding ceremony that could put “Crazy Rich Asians” to shame. But that only infuriates Ria’s paranoia further. It’s like she’s surrounded by brainwashed pod people, and only she can see that marriage would be the worst thing for Lena. And so she sets out to dig up dirt on Salim and, failing that, sabotage the event outright.

Let’s pause a moment to acknowledge that Ria is more than a little dramatic about such things, and her best friends Clara and Alba (Seraphina Beh and Ella Bruccoleri) are good sports to humor her, but even they have limits. It’s not the dressing up as dudes and infiltrating the men’s locker room to steal Salim’s laptop at the gym — they’re game for that mission. But Ria is an intense personality, grunting and grimacing rudely when things don’t go her way, and after a point, she starts to seem like a brat — one of those hopelessly misunderstood kid characters cooked up by Neil Gaiman or Roald Dahl perhaps.

There’s a silly, deliberately over-the-top quality to the acting and the writing alike, and though it’s not quite believable (nor is it trying to be), the melding of Manzoor’s screenplay with her ensemble’s line readings make for an infinitely quotable future classic. If “Polite Society” manages to find its audience (which is younger than its Sundance midnight movie status might suggest), it has the makings of a generational touchstone. That is, if Focus Features can convince content-saturated young people that this hilariously deranged high school comedy — which makes room for fight scenes and a hilarious, homicidally choreographed musical number — is worth a look.

When Ria’s latest mission (to break into Salim’s room and plant condoms full of hand lotion on the scene) goes south, the audience might finally agree she’s gone too far. But Manzoor is just getting started, taking the movie into thematically appropriate (patriarchy-challenging) “Twilight Zone” territory in the final stretch. The villain through all of this isn’t Salim so much as his mother, Raheela (Nimra Bucha), who sneers, “Behind every great man, there’s a very tired mother who’s sacrificed everything.” Sounds about right, and respected Pakistani stage and screen star Bucha is just the person to sell such a line. She can twist her face into the kind of Machiavellian expressions you might have thought only Disney animators could achieve, making for an immensely satisfying climactic battle between her and Ria.

These conflicts, which start with a fight against school bully Kovacs (Shona Babyemi) early on and escalate as the film unfurls, are presented as “Mortal Kombat”-style showdowns, complete with gravity-defying wirework and slow-motion effects. In many respects, “Polite Society” comes across as a giant pastiche of Manzoor’s favorite movie references, with homage paid to films from all over the globe via individual shots and sound cues throughout. But there’s no denying her creativity or the defiantly original voice she brings to her characters. In the end, even though Ria winds up vindicated about her resistance to Lena’s wedding, the last scene feels like a reverse of “The Graduate,” as the movie’s anti-Austen finale leaves audiences wondering what comes next for the Khan sisters.

Facebook
Twitter
Pinterest
LinkedIn
Email
2023-01-21
Previous Post: Sundance’s ‘The Pod Generation’: Director Sophie Barthes on A.I., the Future of Motherhood, Our Relationship to Technology and Nature
Next Post: Brooke Shields Opens Up on Her Mom and Manager Teri’s Alcoholism: ‘I Said Goodbye to Her Every Time She Drank’