PGA Tour 2K23: Everything We Know

Professional golf is in a state of upheaval and controversy with the PGA Tour and LIV Golf publicly sparring and jockeying for supremacy. That drama hasn’t derailed 2K’s plans for PGA Tour 2K23, as the game remains on schedule to launch in October. But what’s new and exciting about the latest entry in the series? We’re rounding up all the key details to know.

PGA Tour 2K23 is releasing on October 14, but those who pick up one of the more expensive versions, including the Tiger Woods Edition, can jump in beginning October 11. The game will be released on PlayStation 4, PlayStation 5, Xbox One, Xbox Series X|S, and PC.

One of the most iconic golfers and celebrities on earth, Tiger Woods, is the cover star for PGA Tour 2K23. He is also an executive director and consultant on the game, which is developed by HB Studios. The studio previously developed The Golf Club series until Take-Two acquired it.

There is a Tiger Woods Edition of PGA Tour 2K23 that includes three-day early access, along with a number of cosmetic DLC like Tiger Woods’ TaylorMade wedge set and his Nike TW shirt.

So far, 2K has announced a dozen playable pros for PGA Tour 2K23, and they include Woods, Justin Thomas, and Will Zalatoris from the PGA Tour. LPGA Tour players in the game include Lexi Thompson, Lydia Ko, and Brook Henderson. 2K says it will have more players to announce later. The initial list of PGA Tour 2K23 players are all PGA Tour members. None of them play on the rival LIV Golf tour now, but if anyone jumps ship to the newer league, they will remain on the roster of PGA Tour 2K23, a spokesperson told GameSpot. The PGA Tour has banned all players who join LIV Golf, so it’s no surprise that the list is made up only of PGA Tour players.

In addition to golf superstars, PGA Tour 2K23 features basketball legend Michael Jordan as a playable character for people who preorder the game. Jordan is known for his love of golf, so this isn’t a totally random partnership.

PGA Tour 2K23 will have a new Topgolf mode that emulates the popular driving range experience. Just like with the real driving range/entertainment experience, players will aim for targets in an attempt to get the highest score, among other challenges.

PGA Tour 2K23 features more than 20 officially licensed courses, including some of the most famous ones: TPC Sawgrass, TPC Scottsdale, and East Lake Golf Club. The game also includes a course-builder feature that allows players to create and share their own original courses.

In addition to local multiplayer, PGA Tour 2K23 brings back its societies mode for online multiplayer. Players can create groups and host tournaments with your friends and find other societies in the hub to join. 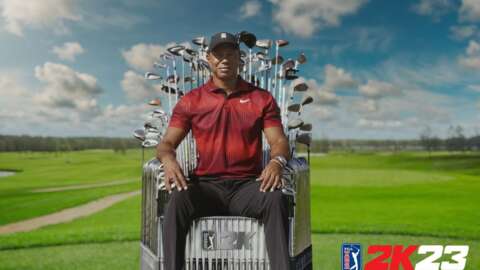