Naraka Bladepoint, the melee focused battle royale, is finally making the jump from PC to console, launching on Xbox Game Pass. As new players and lapsed players join the battle online, there is some important information that the game doesn’t tell you, but which you need to know in order to win. Here are some tips and tricks to help you win in Naraka Bladepoint.

Pick the best character for the situation

Similar to Apex Legends, Naraka Bladepoint features a number of different named heroes, all with their own abilities and skills. Depending on if you choose to play solos, duos, or trios, the best character for that situation might change. For example Kurumi is a healing-focused character, with both her skills–and their variants–all focused on healing Kurumi and her teammates. That makes her a great pick for trios or duos and a terrible pick for solos. Each character in Naraka Bladepoint also has their own level, which lets you unlock new skill variants and skill points. Because of this, it’s best to figure out the two or three characters you prefer to play and stick with them.

Be flexible and aggressive in combat

Since combat changes heavily based on what type of weapons you have, both ranged and melee, it’s natural to gravitate towards specific weapons. Combined with the fact that you could pick skills that favor a specific type of weapon, you might find yourself scouring the battlefield for that one weapon type. With the way loot is distributed in Naraka Bladepoint, it makes the most sense to be flexible in combat and try to learn at least the basic attack patterns of each weapon. While you might eventually find the weapon you’re looking for, you will likely need to use whatever you get your hands on, especially if it’s a high rarity.

When in combat, the best thing you can do is be aggressive. Each character has two abilities, one on cooldown, one on a meter. You should use these abilities whenever you are in combat to try and gain an edge. The cooldown is relatively short and saving your abilities is pointless if you die. With most weapons it’s also fairly easy to get enemies in a stunlock with the charged attacks, so get in people’s faces. This is also a great time to use the grappling hook if you have it, to close the distance between you and your foe. Just make sure you are repairing your weapons and armor in between fights.

Perhaps one of the more overwhelming parts of Naraka Bladepoint is looting. This is because there are a ton of different items to pick up and you have to really manage your inventory. When it comes to loot, you can find weapons, consumables, Souljades, coins, and upgrades. Weapons are fairly simple, with melee and ranged weapons of different varieties dropping. You can carry two weapons out of your bag and keep up to four weapons in your bag, if you have found enough upgrades. Consumables cover health items, armor items, weapons repair kits, and grappling hooks. The important thing to note here is that you have a set number of inventory slots for these items, but you can fill them however you see fit. You could carry less healing items in favor of more grappling hooks or vice versa. Each consumable will allow for a certain number to stack in a single slot–for example a single inventory spot can hold six grappling hooks.

Souljades are one of the more important items you can loot in the Naraka Bladepoint. You can hold a limited number, which can be increased by finding bag storage upgrades. At the lower rarities, Souljades can give you bonus damage, health, etc. The higher rarity ones can add specific weapon bonuses, status effects like poison, or special skills like dodge rolling whenever you repair a weapon. If you find a higher rarity Souljade, the game will typically autoswap them when you try to loot them, but if you have an abundance to choose from you will want to manualing pick your Souljades. For example, the game doesn’t always recognize if you have the right weapon for some of the higher rarity Souljades and won’t automatically swap those.

The last type of loot is Darktide Coins. These coins are found in most loot caches and are dropped by enemies when killed. They can also be earned by finding scrolls during the match and completing the quest given to you. These coins can be spent at Darktide vendors, found around the map. The vendors look like treasure chests with a hand sticking out. If you have an opportunity to spend your coins, do it, they don’t carry over from match to match. 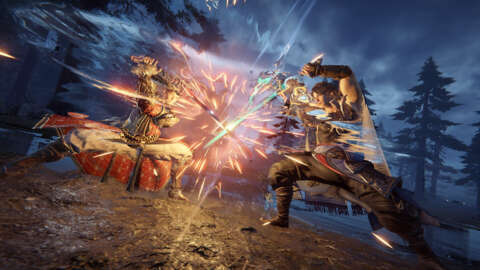