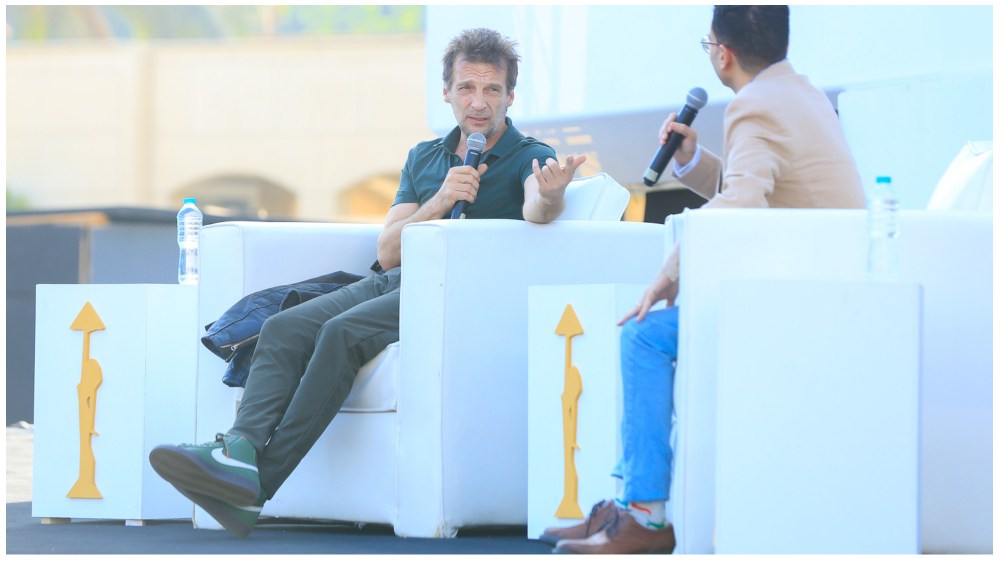 During an explosive, expletive-filled masterclass at Cairo Film Festival, French director and actor Mathieu Kassovitz covered everything from directing “La Haine” to working with Vin Diesel on “Babylon A.D.”

Talking about the making of “Babylon A.D.,” he said: “Go on YouTube and search for ‘Fucking Kassovitz.’ Once we realized the crazy situation we were in, we made a documentary about it. If something is important to you, don’t do it unless you have the right partners. Because if you don’t, they will fuck you up.”

After Berry broke her arm during one of the scenes, things got even more out of control.

“[Robert Downey Jr.] was just coming out of rehab, nobody would hire him. She said: ‘I don’t want to work with him anymore.’ I had to continue with doubles. If it was one of ‘my’ movies, I would have died. But because it wasn’t, I just went: ‘Meh’.”

“La Haine,” set in the Parisian suburbs, was very much “his” movie, however. It shocked the viewers back in 1995.

“Nobody did anything like that after either. I have been waiting for a film that would make you go: ‘Oh shit, it’s different.’ It’s starting now, because people who were kids when it came out are now making movies. Like Romain Gavras, who made ‘Athena.’ He was my neighbor! It’s the same energy,” he said.

“I am lucky because thanks to this movie, I don’t need to work anymore. I am a legend. The less I do, the better I am, because every time I make something else, people go: ‘It’s not ‘La Haine.’ I should just stop.”

“Athena,” although “more powerful” than his film [“La Haine”], will have less of an impact now, Kassovitz suggests.

“If you make political films, you have to make them when things are happening, otherwise you are too late. When we made ‘La Haine,’ nobody knew about these kids in the projects. It wasn’t just a film: it was news.”

His statement wasn’t well-received by one audience member, leading to a heated exchange.

“I am not saying that racism is over or not important, you crazy woman,” said Kassovitz, attempting a joke. “I am saying that before, people didn’t know [about certain things]. Now, people who are racist are racist because they want to be. There is no ‘racist system.’ Racism is inside each one of us, it’s part of human nature. That’s why we will never get rid of it.”

“Athena,” shown in Venice in September, is a Netflix production.

“What made ‘La Haine’ ‘La Haine’ is that you had to go to the cinema to see it. When everyone was shocked [by the ending], they started to talk. If you are at home, shocked by yourself, who gives a shit?”

“Once you know it won’t be on the big screen, you let yourself go. ‘The Irishman’ is a shitty movie. […] It’s long and boring. Platforms make good movies too, but I wouldn’t work for them. I would love for them to come to me, saying they will give me $10 million and then [an additional] $100 million for the budget, and I would love to say: ‘Fuck you,’” he said.

“This is not cinema and I don’t want to prostitute myself, although for $10 million maybe I should. Don’t applaud! If they offer me that, I will do it.”

Kassovitz, who started acting in his early teens, isn’t too fond of the profession anymore.

“The thing is, I am not an actor-director. I am a director-actor,” he stated.

“Acting is mostly about being a puppet, it’s not interesting or mentally challenging. I feel completely empty when I am acting. I feel like I am wasting my life.”

But he still says yes to the directors who inspire him.

“I go: ‘Fuck, yes. Please.’ Although I am still pissed at [Michael] Haneke, because it took him five hours to complete one simple shot. What the hell, man?!”

“My whole life revolved around Spielberg and his movies, and then one day he called. ‘Fuck, I can see this guy work!’ It’s like standing right next to a heavyweight fighter,” he added.

“When I was 12, my father recorded ‘Jaws’ and I was very impressed. Then he said: ‘Look at it again and try to analyze how it was made. Why are you scared?’ I realized it was all about the camera movement. He was trying to tell people the shark was there, but it wasn’t, which led him to create a masterpiece. Believe that the audience is smart. If you do, you won’t have to show them everything.”