Marvel’s Avengers Support Is Ending, But All Modes Will Remain Playable

Marvel’s Avengers, the 2020 live-service game from Crystal Dynamics and Square Enix, will lose its official developer support almost three years to the day since it was released, the studio said in a blog post. The final game update, version 2.8, is coming on March 31 with support for the game shutting down for good on September 30.

The team added that though developer support for the game is ending, both the single-player and multiplayer modes will continue to be available. The most recent content pack, which added the Winter Soldier hero and Cloning Lab Omega-Level Threat as part of update 2.7, will now serve as the game’s final content update, with the forthcoming 2.8 patch only addressing balancing issues. The in-game economy will also be altered to reflect the new reality for the co-op superhero romp.

“When update 2.8 launches on March 31, 2023, Credits will no longer be purchasable and all remaining Credit balances will be converted into in-game resources to aid ongoing adventures.”

For big fans and would-be new players, the silver lining in the news is how the team will handle the game’s previously paid content packs.

“As a show of our appreciation for our community, starting March 31, 2023, we will make all the game’s Marketplace, Challenge Card, and Shipment cosmetic content available to all players for free. Every single Outfit, Takedown, Emote, and Nameplate [will be] free from this date onwards.”

Avengers debuted to middling reviews and was, in the years that followed, an often polarizing game, with some players enjoying its live-service loop of heroes to upgrade and customize, while others decried what they felt were forced in-game systems that took away from what could’ve been something greater. In the end, the game saw the release of 12 distinct heroes, which leaves many more from Marvel’s enormous cabinet of characters untouched. 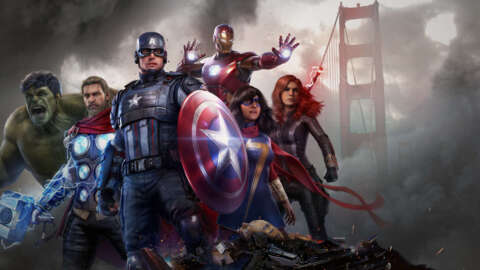