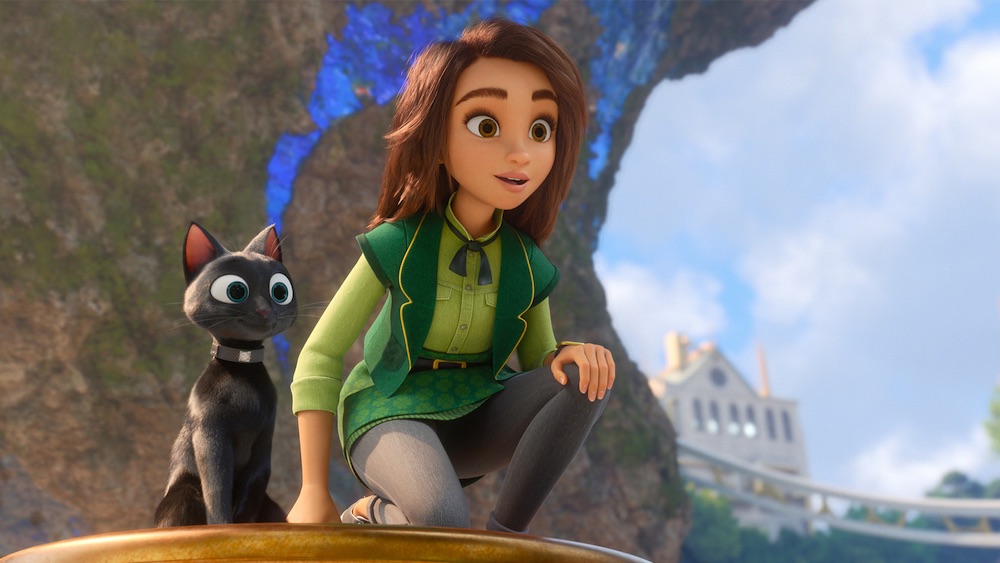 Full disclosure: I don’t believe in luck, but I do believe that “Luck” — the first feature-length toon from David Ellison-backed Skydance Animation — represents a force for good in the world. It’s not easy developing both a pipeline and a project that could compete with the Disneys and DreamWorks out there. (And yet, this was famously the film that Emma Thompson quit in protest when the company hired ex-Pixar honcho John Lasseter.) While the new studio’s debut can’t touch “Toy Story,” it’s an auspicious start for a talented group of storytellers.

After Lasseter got involved, “Luck” changed direction — and directors — picking up choreographer-turned-helmer Peggy Holmes (who had two Tinkerbell movies to her credit, but nothing of this scale) and shifting to a plot full of cute supporting characters (lilting leprechauns! dancing bunnies!). Still, the creative team never quite cracked their promising subject, settling on a plucky but unlucky 18-year-old orphan who travels to the source of both good and bad luck — a garish Willy Wonka-esque parallel world where most of the movie takes place — in order to collect a magic penny for her best friend Hazel.

In addition to not having a “forever family” of her own, Sam Greenfield (voiced by Eva Noblezada) is cursed with clumsiness, constantly losing things and making messes wherever she goes. Freak accidents have a way of finding her, as illustrated by the all-too-relatable (and therefore amusing) sequence of mishaps she experiences the first morning of her new job: Sam gets smooshed between her mattress and the wall when her Murphy bed snaps shut with her inside, then locks herself in the bathroom, drops her toast (jelly side down, of course) and hits every red light on the way to work.

No wonder Sam thinks of herself as the unluckiest person alive. Except that Sam is alive, which sort of disproves her theory from the start. She already won the biological lottery that resulted in her being born at all, and despite the countless embarrassing and/or painful setbacks she faces on a daily basis, she hasn’t died yet. That’s more than can be said for the poor sod fatally struck by lightning or the hapless pedestrian flattened by a falling window AC unit (these aren’t characters in the film, but counterexamples from real life).

Once you take into account what a klutz Sam is, she may actually be the most fortunate person in the movie: She’s got a great boss (in Lil Rel Howery’s Marv), a free apartment and a snazzy green denim jacket. What’s more, there are entire sequences in which bad luck seems to be working to her advantage. In short, we’re dealing with a false predicament here.

This may sound like nitpicking for a cartoon that’s intended to be frivolous and fun, except that luck isn’t one of those phenomena that people around the globe can agree on. Take the black cat, Bob (Simon Pegg), who becomes Sam’s ticket to the Land of Luck. In most countries, black cats are a bad omen, but not in Scotland, which Bob calls home, or Japan, where Hayao Miyazaki classic “Kiki’s Delivery Service” was made. There, they’re a blessing. So which should it be? (Incidentally, Bob looks and moves a lot like Kiki’s feline companion, Jiji, which makes sense, given Lasseter’s love for Studio Ghibli.)

Clearly, the creative team had to make lots of choices, including the rather obvious one of eliminating religion and letting luck be the only force Sam and Hazel (Adelynn Spoon) believe in. If the girls came from a church-affiliated orphanage, they’d be praying to be adopted. Instead, Hazel collects lucky charms (look for crayon drawings of the iconic marshmallows above her bed) and hopes for the best. One day, Sam discovers a lucky penny left behind in the human world by Bob (lucky for her), loses it (unlucky) and follows Bob through a magic portal (lucky). Is the penny really helping Sam in any of those situations?

According to its own strange logic, the movie treats luck as a glowing green force that makes life easier for those who receive it, seemingly at random, from the Land of Luck, where leprechauns pipe the stuff toward Earth and bunnies (fortunate enough to still be attached to their feet) serve as the movie’s adorable Minions. On the flip side of this small planet is Bad Luck, inhabited by more troll-like creatures tasked with handling a more disastrous purple substance. Keeping the two elements in equilibrium are a giant pink good luck dragon (Jane Fonda), the captain of her diligent leprechaun workforce (Whoopi Goldberg) and a daffy German-accented unicorn named Jeff (Flula Borg, so funny we need his spinoff right now), who behave largely as the story requires.

There’s something so simplistic and glib about Kiel Murray’s screenplay, which is so preoccupied with the lucky-penny-chasing plot that it short-changes the relatively clever observations about chance that make the opening stretch so promising. If only the movie had had more fun with luck itself — the way “Deadpool 2” did, when introducing the novel notion that it might be the most useful superpower of all.

Instead, we’re stuck in the Land of Luck, which turns out to be an oddly corporate place with gleaming buildings and floating elevators — the sort of overpolished CG fun park, à la Brad Bird’s “Tomorrowland” or so many Marvel metropolises, where every building was designed in a computer by one person over a long weekend, instead of conceived to reflect several millennia of rich cultural heritage. (It’s a distressing trend in VFX-driven movies that foreign worlds are designed to impress at first sight, rather than reflect the people that inhabit them.) It’s a realm one sees and fleetingly admires, but doesn’t really want to spend any time exploring — like the Netflix cafeterias or a break room on the Google campus.

But Sam wants her penny, and so we’re obliged to follow her on a series of trial-and-error tasks to retrieve it. That means making friends with Bob (Pegg is great as the slow-to-thaw feline) and the denizens of Bad Luck (including a bartender voiced by “Cheers” vet John Ratzenberger). You can see where this is going a mile away, as orphan Sam bonds with practically everyone she encounters — including the audience. Whenever the movie runs out of ideas, Sam breaks into a spontaneous karaoke/dance version of Madonna’s “Lucky Star” (the tyranny of TikTok on popular entertainment once again). Your mileage may vary. “Luck,” as they say, is what you make it.