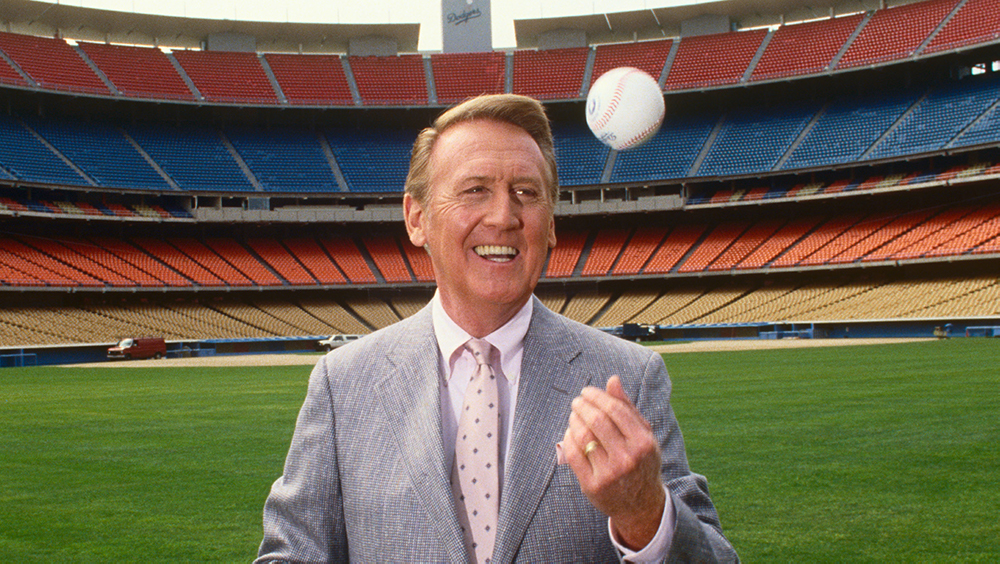 The sports world and the city of Los Angeles are paying tribute to Vin Scully, the legendary sports announcer that called 67 seasons of Dodgers baseball. Scully died Tuesday at the age of 94, leaving behind a towering legacy as one of the most prominent, skilled and dedicated play-by-play announcers ever.

“We have lost an icon,” said Dodger president and CEO Stan Kasten in a statement announcing Scully’s death. “Vin Scully was one of the greatest voices in all of sports. He was a giant of a man, not only as a broadcaster, but as a humanitarian. He loved people. He loved life. He loved baseball and the Dodgers. And he loved his family.”

The organization shared a second tribute post to Scully, detailing his history with the Dodgers which dated back to the team’s days playing in Brooklyn in the 1950s.

There will never be another Vin Scully. You will be forever missed. 🎙💙 pic.twitter.com/WyTmXsati5

Los Angeles Mayor Eric Garcetti called Scully’s death “the end of a chapter of our city’s history” and deemed the announcer “the Voice of LA.”

Vin Scully’s passing is the end of a chapter of our city’s history. He united us, inspired us, and showed us all what it means to serve. Our City Hall will be lit up for you tomorrow Vin, our dear friend, the Voice of LA. Thank you from a grateful and loving city. #vinscully

“Twin Peaks” co-creator and novelist Mark Frost recalled living close to Dodger Stadium as a kid and falling asleep “each night with his voice in my ear.” He added that he was “proud to call him my friend these last 20 years.”

I heard his voice more often than my father’s. Lived a mile from Dodger stadium. Fell asleep each night with his voice in my ear. Proud to call him my friend these last 20 years. Night, Vinnie. We’ll never forget you. #VinScully

Vin Scully, there will never be a voice in baseball like Vinny. He was the standard for broadcasting. As he said it, you could see it, feel it, you were at the park. Vinny loved his family, baseball and the @Dodgers. RIP Vin Scully. My prayers to your family.

Los Angeles Lakers legend Magic Johnson shared his appreciation for Scully: “He had a voice and a way of storytelling that made you think he was only talking to you.”

I’ll always remember his smooth broadcasting style. He had a voice & a way of storytelling that made you think he was only talking to you. His Hall of Fame career is to be admired. Vin was the nicest & sweetest man outside of the booth & was beloved by all of our Dodgers family.

Sports writer and documentary filmmaker Jon Bois stated that there was nobody who’s ever lived who he admired as much as Scully: “I was and am in awe of him.”

there is no one who’s ever lived who i admired more than vin scully. even well past 80 years of age he would run a one-man broadcast booth every day and he was sharper, funnier, and more endearing than anybody. i was and am in awe of him. love you mr. scully, you were one of one https://t.co/iHNPlTbERn

NBC Sports Bay Area reporter Alex Pavlovic shared a comment by San Francisco Giants commentator Mike Krukow on Scully’s death: “I figured if he said my name on the radio, I had arrived.”

Vin Scully was the voice I grew up on. To me there wasn’t anybody better. All i ever wanted in my career was a game called by him and although that never happened I’m still so happy that I got to listen to the greatest ever. Rest in Dodger Heaven Mr. Scully.

Vin Scully gave West Coast baseball its voice, SoCal summers their soundtrack for generation after generation. As kind and friendly off the air as on. Another piece of #Dodgers rich history is gone.

I literally pulled the car over in awe one day in LA because I could not believe that any human being could put anything that perfectly. Rest In Peace Vin Scully. Rest In Peace.

Growing up in LA, one heard the sound of Vin Scully’s melodious voice echoing from gas stations and portable radios all summer. We had a chat once, and, before an enthralled audience, he was an effortlessly fascinating storyteller. And a proper gent.. RIP, Vin.

Vin Scully, voice of the @Dodgers, has died.

He was a true sports storyteller & his #Dodgers career lasted 67 years, the longest tenure of any broadcaster w/a single team in pro sports history.

Our deepest condolences to his family. Rest easy, @TheVinScully. You will be missed. pic.twitter.com/wSbMf6NYtX

RIP Vin Scully. Nobody better, ever.