Now that Knockout City is a free-to-play game, the city is home to a lot of brand-new players, with uninitiated dodgebrawlers heading to the rooftops every day. That means the skill gap between the best players and the most inexperienced has never been wider. Whether you’re looking to climb the ladder in League Play, find your footing in Street Play, or just figure out how to master the fake throw, use our guide full of nine tips to get you up to speed in Knockout City and you’ll be pummeling players with that satisfying dodgeball smacking sound in no time.

Master the art of the fake throw

A dodgeball is a powerful weapon in the hands of a skilled player, but sometimes it’s the moments you don’t throw a ball you have in hand that can give you the best advantage. Clicking the right stick allows you to pump-fake with the dodgeball like Peyton Manning at his kids’ field day. This can catch players off-off-guard, allowing you to trick them into attempting to catch the ball you didn’t actually throw. Knockout City is designed so that once you start the catch animation, it can’t be stopped, so when your opponents react early, they’ll be stuck in the animation and will be leveled by your follow-up throw. Pow!

Passing to teammates is faster than charging a ball yourself

Charging a ball to make it fly faster by holding down the throw button (right trigger on controllers) is important. You don’t often want to throw the ball slowly–though it does have its uses–but fully charging it takes a beat, so it’s good practice to pass the ball around with your teammates. Whenever you do, the ball will be instantly charged.

In two-on-one situations, quick passing and timely KOs can make your crew look like the Globetrotters of dodgeball. Passing is often underutilized outside of upper-crust League Play, so impress your friends by actually sharing the dodgeballs sometimes.

Deflecting a ball is sometimes just as good as catching it

Dodging and dodge-deflecting are unique dodgeball rules in Knockout City. Typically, an enemy hitting you with a ball means you’re out. But in KOC, dodging into an oncoming ball at just the right time will knock it away, and you’ll take no damage. This strategy is especially useful when you’re outnumbered and when you’re in close with the enemy, as it’ll knock the ball out of their hands (and maybe even off the map) and leave them dizzy for a moment if you tackle them with your dodge.

Catching the ball is the first barrier to playing well in Knockout City, but the next major filter is finding out who can dodge and who is gonna leave with dodgeball imprints on their cheeks.

Once you’re able to reliably catch a ball thrown at you, you’ll find yourself getting into bouts of hot potato, where you throw the ball, the enemy catches it, throws it back, you catch it, throw it back, and so on. This should be avoided for two reasons: First, the ball speeds up with each throw and even good players will often slip up after about three or four volleys. But more importantly, throwing it right back is often what the other player expects.

Hesitating, even just slightly, to throw it back or pass it around a bit to allies is the smarter play. Just like the fake throw can ruin the expected cadence for an enemy, delaying that would-be instant volley even just for a half-second can help you land a hit.

There are plenty of times in Knockout City where running is critical; getting to a loose ball and charging into the fray to keep teammates upright are just two examples. But one time when you won’t want to be running around much is when an enemy has you in their sights. When that’s the case, your screen will fill with a red frame and the charging ball will show itself as a protrusion out of that frame, and it moves relative to your attacker’s positioning.

Always face your enemy when this is happening. It’ll mean you may need to backpedal or strafe left or right, thus losing some speed, but you can’t catch the ball if it hits you in the butt. Facing them head-on is extremely important.

Knockout City can often feel frantically paced, but as with some other tips in this guide, we want to help you remember to slow down at times. Charging around the bend may land you in a problem you can’t solve, and though most players don’t play the corners per se, that’s why you should. When an enemy is giving chase, or perhaps doesn’t even know you’re lying in wait, manipulate the camera so that you can see them coming before they get to you.

This can help you land what is basically a stealth attack, where they run right into your well-placed trap. For a similarly stealthy move, stalk a player from a height advantage and only lock onto them once you pounce down below, like a dodgeball-wielding Batman.

One of our favorite tactics is the quick lock-on change you can perform when charging a ball. If you’re facing multiple enemies, the one you’re locked onto will have that aforementioned red frame on their screen, but if you quickly move the lock-on targeting to another player and then throw it at full speed, the lack of any warning can often be unstoppable. Players get preoccupied with who is aiming at them, so if you don’t tip your hand until the last second, they’ll take a dodgeball right to the nose.

Maybe the most satisfying thing to do in Knockout City is to jump over someone’s dodge and have them bonk their head on the environment. Like a matador, you can easily bait them into this by using the taunt button (up on the D-pad). Many players will appear to become enraged or determined to whack you even without a ball. Causing them to whiff and crash into a wall–or even better, charge off the map–is a dastardly funny way to score a point for your team. I’ve found the longer a player goes without enacting their vengeance, the worse their tunnel vision gets.

You can often spot a new player because they’ll glide around the map. What would normally be the double-jump button (A+A on an Xbox controller, for example) actually deploys your glider in KOC. This is helpful when clearing a dangerous gap on one of the game’s maps, but that’s about the only time you should glide. Gliding is slow and leaves you vulnerable, while spin- or flip-jumping can be done as many times as the distance between your feet and the ground below allow. Any gap that can be cleared without gliding should be cleared that way. 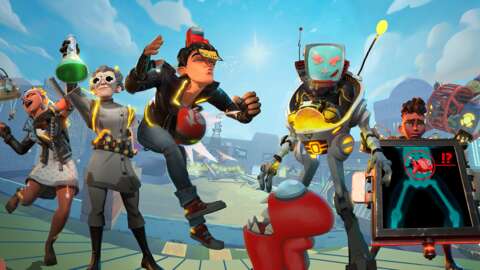