How To Evolve Girafarig Into Farigiraf In Pokemon Scarlet And Violet

Farigiraf in Pokemon Scarlet and Violet is Girafarig’s new evolution, a pumped-up Normal and Psychic dual type with an impressive special attack stat. Finding Girafarig and getting them to evolve is a fairly involved process that takes some time and effort, but Farigiraf occupies a unique spot among Psychic types and packs a mighty mental punch as well.

Where to find Girafarig in Pokemon Scarlet and Violet

Girafarig only calls one place their stomping grounds: West Province Area Two. This area is one you won’t be able to access until a bit later in your journey, as you need your Koraidon or Miradon to recover their swim ability before you can access this region. Defeating the second titan–Bombardier, also in West Province–unlocks swim, and you should be able to successfully defeat them around the time you complete your third Gym battle.

West Province Area Two is pretty large, but it seems like your best bet for finding Girafarig is in its western portion, just north of the Asado Desert and east of Port Marinada. If you don’t find a Girafarig right away, cross the boundary into Port Marinada and leave again to reset the nearby wild Pokemon.

It took us roughly 10 minutes or so to find a Girafarig, so you may have to repeat this process a few times. You may get lucky and find a Girafarig in some Tera Raids. As far as we can tell, there are no fixed Wild Tera Girafarig in Scarlet and Violet, though, so you would need to just try checking any Tera Dens you come across–a lengthy process and not the best method.

If you don’t want to scour the plains for more, find a Ditto and breed your Girafarig to get some Eggs.

How to evolve Girafarig into Farigiraf

Girafarig evolves into Farigiraf after you meet a few conditions. Your Girafarig needs to know Twin Beam, which they learn at level 32, and they need to level up while knowing that move. The Girafarig you catch in West Province Area Two are around level 25. You’ll have to use them in battle, send it out to auto battle, or use EXP Candies earned from Raid battles to push their level higher.

Can you catch Farigiraf in the wild?

Yes, but not for a long time. Farigiraf roam the wilderness of Area Zero, which you don’t get access to until the end of the game. If you breed Farigiraf, the resulting egg will give you another Girafarig, so catching a Farigiraf in the wild is only useful if you want one with different effort values or a different nature.

Farigiraf is essentially an enhanced Girafarig, for better and worse. Its base special attack is exceptionally high at 120, which is approaching Alakazam levels of strength. Unlike Alakazam, though, Girafarig is fairly slow, and while they have better defense, they still won’t withstand too many strong attacks.

All this is standard for Psychic types, though, and Farigiraf’s Normal dual typing means they give you an extra advantage against Ghost types. It may be somewhat niche in the meta, but it’s certainly worth experimenting with.

If you’re looking for some more tips, check out our list of things we wish we knew before starting Scarlet and Violet so you don’t have to make the same mistakes we did. And to get another strong new Paldea Pokemon to your team, have a look at how to evolve Charcadet, whose final form changes depending on which version of Scarlet and Violet you’re playing. 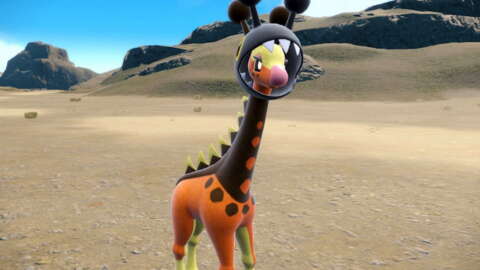