How To Connect Discord To Xbox

Xbox users can now finally use Discord voice chat, but to do it, you’ll need to jump through a few minor hoops first. Once it’s all set up, you and your buddies on other platforms won’t need to worry about using game chat. You can all talk to one another without others chiming in on your conversation. Here’s everything you’ll need to know about how to connect Discord to Xbox.

To use Discord on your Xbox, you’ll need to have the following:

Link Discord to your Xbox

The first thing you’ll need to do is open the Discord app on your phone. Once you’re on the app, you’ll want to click on your profile picture, which can be found in the bottom right corner of the app. Scroll down, and when you see the Connections tab, select it.

In the Connections page on the top right, you’ll see another tab that says Add. Click that and scroll down until you select Xbox. Afterward, you’ll be greeted with a prompt on your phone to start the linking process.

You’ll want to follow the process and proceed to log into your Xbox account via the Discord app. Now that it’s linked, you’ll receive another prompt letting you know that you’ll need to have the Xbox Mobile App installed on your phone, so make sure you have it ready to go.

How to use Discord on Xbox

Now that you have everything linked, the following steps shouldn’t take long at all. You’ll want to join a discord voice channel from your phone. Afterward, on the app, scroll up, and you’ll want to click on the tab that says Join on Xbox.

As soon as you click it, you’ll load into the Xbox mobile app, and from there, you’ll need to click on the Transfer Voice tab. After you do that, you’ll be able to chat with your friends on Discord from your Xbox.

It’s also worth mentioning that you can connect your Xbox to a Discord voice channel from a PC too. But to do so, you’ll need to scan a QR code using the Xbox Mobile app to join.

Once you’ve officially connected to two, you’ll be able to view who is in the channel, like you could with a normal Xbox Party, and adjust the settings to how you see fit.

For more Xbox news, be sure to check out these stories: 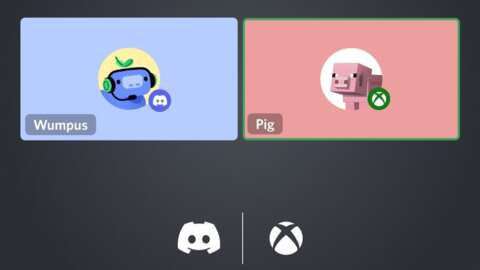