Here’s What You Need To Know About the YSL Trial 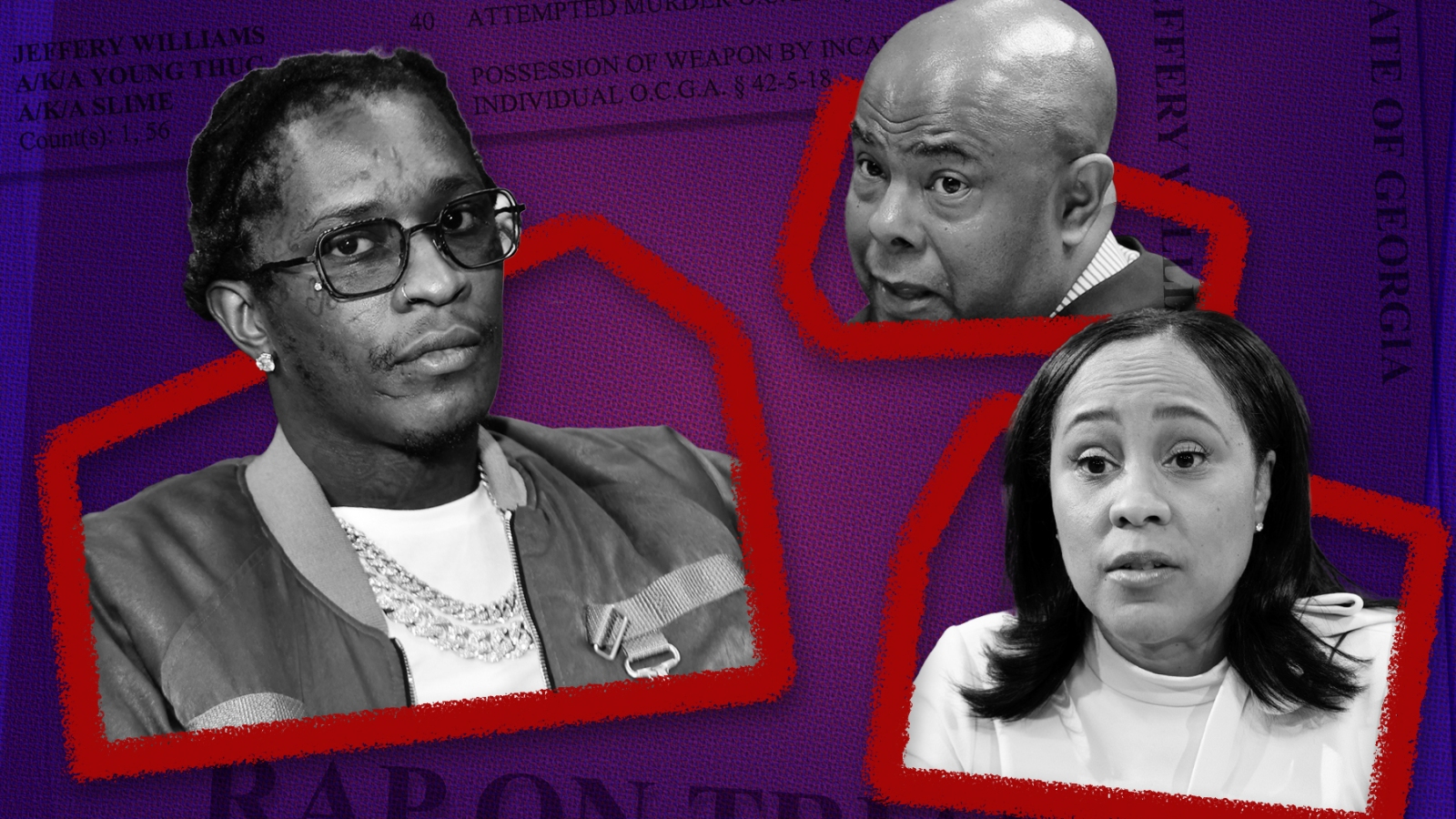 The most notable instance to date of “rap on trial” is about to get underway in Atlanta. Jury selection in the YSL RICO trial started on Jan. 4, and that phase is expected to last into February as prosecutors and defense attorneys vet more than 600 people to determine the best set of jurors for the high-profile case. Multi-platinum rapper Young Thug, a.k.a. Jeffery Williams, is the most well-known defendant standing trial. He’s facing eight counts in the 65-count indictment, with prosecutors alleging that he’s the leader of a subset of the Bloods called Young Slime Life that they claim are responsible for murders and other violence in the Atlanta area.

Eight months ago, on May 9, 2022, Fulton County prosecutors announced the indictment of Williams as well as rappers Sergio “Gunna” Kitchens, Arnold “Lil Duke” Martinez, Deamonte “Yak Gotti” Kendrick, Williams’ brother Quantavious “Unfoonk” Grier, and 23 other people that District Attorney Fani Willis accused of being part of a YSL criminal organization. Their defense attorneys have repeatedly stated their innocence, with Williams’ lawyer Brian Steel declaring, “Mr. Williams committed no crime whatsoever, and we will fight to my last drop of blood to clear him.”

The prosecution’s usage of lyrics, music videos, and social media posts as evidence has sparked outrage from criminal justice reform advocates who see this as a First Amendment violation that exemplifies the racially motivated criminalization of rap.

In the seven months leading up to jury selection, numerous defendants have struck plea deals, including Kitchens, who took an Alford plea that a source told Rolling Stone was devised “to neutralize him and keep him out of the game“ by keeping him from testifying (without conceding guilt). Currently, there are 14 defendants set to stand trial simultaneously, with eight defendants previously taking plea deals, four defendants being severed from the trial for not having legal counsel, and two men having not been arrested. Below is a primer for what you need to know about the upcoming trial.

When will the trial begin?

Jury selection is ongoing as of this writing. Close observers of the case have said that opening arguments are unlikely to begin before mid-February.

What charges are Young Thug and YSL members facing?

Young Thug is charged with eight counts: conspiracy to violate the Racketeer Influenced and Corrupt Organizations Act (also known as RICO), participation in criminal street gang activity, three counts of violating the Georgia Controlled Substances Act, possession of a firearm while committing a felony, and possession of a machine gun. The latter six charges stem from items that police retrieved during the May 9 raid of Williams’ Atlanta home. His legal team maintains that he is innocent of all charges.

The most serious allegation Williams faces is the prosecution’s assertion that he was involved in the 2015 murder of Donovan “Big Nut” Thomas Jr., an alleged Inglewood Blood gang member who was fatally shot outside an Atlanta area barbershop. Thomas aided Atlanta rapper YFN Lucci (a rival of Young Thug’s) at the outset of his career, and Fulton County DA Fani Willis claims the shooting sparked a rivalry between the YSL and YFN crews which “created violence like Atlanta has never seen.” Prosecutors allege that Williams rented the Infiniti sedan that was used in commission of Thomas’ murder, and co-defendant Antonio “Mounk Tounk” Sledge will reportedly testify that Thug gave him money to “lay low” after Thomas’ murder. Thug’s lawyers, again, deny this.

The indictment frames Williams as a gang leader, noting an alleged conversation in which two co-defendants are said to have discussed “how to get permission from… Young Thug … to kill Rayshawn Bennett (YFN Lucci) and what the payment would be to do so.” Elsewhere, the indictment claims Williams “made YSL a well-known name by referring to it in his songs and on social media,” referencing nine songs from his catalog.

The rapper is facing up to 20 years in prison.

Who has taken plea deals?

On Dec. 14, Kitchens pled guilty to one count of racketeering conspiracy and was immediately released after being given a one-year sentence that was commuted to time served, a five-year suspended sentence, and 500 hours of community service. Footage of his Alford Plea hearing went viral, and some were outraged to hear him affirm the prosecution’s claim that YSL is a criminal organization, but a source close to Kitchens told Rolling Stone in December that the rapper won’t be testifying during the trial — which is the only way that those comments could be used in court against his co-defendants.

Stephens also pled guilty to racketeering and was sentenced to 10 years, but received two years time served and eight years of probation. In his plea statement, he affirmed the prosecution’s claim that Thug chided him and other YSL members in a group chat, expressing “Y’all ain’t beat him up or shot him yet? Y’all getting soft” about an unnamed individual.

Grier pled out to one count of violating the RICO Act and one count of theft by receiving stolen property. He was sentenced to 12 years, with two years being commuted to time served and the remaining 10 years being served on probation. He also has to complete 750 hours of community service, and avoid contact with his brother or any other individuals in the indictment.. He’s been mum, but has apparently been communicating his feelings about the case through other people: Days after his release, Unfoonk took to Instagram Live to indirectly reveal that the stipulations of his plea preclude him from using certain terms that the indictment classifies as gang terminology. During the video, one of his friends says, “We can’t even wipe our nose,” another member of the crew says “Slatt,” and someone else says, “Can’t say that. He had to go back in his album and redo lyrics.”

What are some other notable pretrial moments?

Though Jeffery Williams, aka Young Thug, wasn’t granted bond before the YSL trial, his defense has scored some legal victories that will help his case during court proceedings. On Dec. 16, Judge Ural Glanville ruled to suppress evidence the prosecution had seized from a phone that was confiscated from Williams in 2015. Glanville agreed with a defense motion arguing that the phone was retrieved in an unconstitutional search and should have been returned in 2017.

A week prior, Steel filed a motion to suppress Williams’ lyrics as evidence in the case. Steel stated that “using these lyrics/poetry/artistry/speech against Mr. Williams is racist and discriminatory because the jury will be so poisoned and prejudiced by these lyrics/poetry/artistry/speech as same is unlawful character assassination.” But as recent viral footage of Glanville reading Young Thug’s “Slime Shit” lyrics indicate, his lyrics are still being used in the courtroom. Earlier in the court proceedings, during a June bond hearing, prosecutor Don Geary read dozens of lyrics from Young Thug tracks as evidence for why he believed the artist is a danger to the community and shouldn’t be freed before trial. Last August, Fulton County DA Fani Willis was defiant about using lyrics in cases, stating, “People can continue to be angry about it…I have some legal advice: Don’t confess to crime on rap lyrics if you do not want them used. Or at least get out of my county.”

In August, Fulton County prosecutors filed a motion asking Judge Glanville to restrict discovery material in the case from going public after a witness’s name was revealed. During the hearing, prosecutor Don Geary told Glanville that “we found a lot of information concerning one of our witnesses on basically a [celebrity news outlet,” and DA Willis stated, “information from the state’s discovery material has appeared on public websites. As a result, the state now has grave concerns about the safety of that named witness and other potential witnesses in this trial.” The Atlanta-Journal Constitution reported that the witness was placed in protective custody.

Both Williams and Kitchens were repeatedly unsuccessful with their pretrial bond motions, with Judge Glanville denying both men bond on several different occasions, citing his concern about their potential danger to witnesses in the case. On one occasion, Williams’ attorney Steel asked Glanville to approve Williams’ release to rural Georgia, “in a house without any internet, without any electronic media, without any access to anyone except his lawyers.” His request was denied.

In November, Glanville denied the prosecution’s request to delay the trial until March, noting the incarcerated defendants’ right to a speedy trial. “Most of these people have no bonds, that is something that weighs heavily on the court in terms of a start date for this trial,” Glanville said at the hearing. “They deserve to have a right to go to trial.”

As of now, the court proceedings are focused on jury selection. Both prosecutors and defense attorneys are seeking to whittle down 600 citizens to a 12-person jury in a process that’s expected to take until February. At least 122 potential jurors have already requested to be dismissed from the jury, citing various hardships. In early January, the court’s 37-page jury questionnaires leaked online, with jurors being asked questions such as “Do you listen to hip-hop or rap?” and “Do you have an opinion about a person who has head and neck tattoos?”

A bizarre moment occurred during jury selection on Jan. 12, when Judge Glanville penalized a citizen who skipped out on jury selection for the Dominican Republic by making her write a 30-page essay on the importance of jury service (in lieu of a contempt of court charge). A week later, on Jan. 19, prosecutors filed a motion alleging that Williams obtained a pill from his codefendant Kahlieff Adams during a handshake. Fulton County court deputies also caught Adams with weed and tobacco on him, and he was taken to Grady hospital after allegedly ingesting some of the contraband. Prior to these incidents, proceedings were disrupted by two other incidents of defendants allegedly attempting to smuggle weed into jail.

Who will be going to trial, and who is testifying?

Judge Glanville told the jury that he expects a six- to nine-month trial for the 14 people standing trial. In December, Glanville severed the following four men from the case because they weren’t able to secure attorneys: Javaris “Tuda” Bradford, Jevon “4Tray/Psycho” Fleetwood, Damekion “Dee/Sxarfaxe” Garlington, and Demise “DK” McMullen. Justin “Duwap” Cobb and Jimmy “Roscoe” Winfrey (who had a 2015 conviction for allegedly shooting at Lil Wayne’s tour bus overturned in 2020) were also severed from the trial because they haven’t been arrested.

Despite those big names, the most notable testimony of the trial may be from Antonio “Mounk Tounk” Sledge, who, as part of his plea agreement, is expected to testify that Williams gave him money to “lay low” after Donovan “Big Nut” Thomas Jr.’s murder. The jury’s perception of his testimony will play a large hand in Williams’ legal fate. Opening statements in the trial will begin shortly after jury selection is complete.