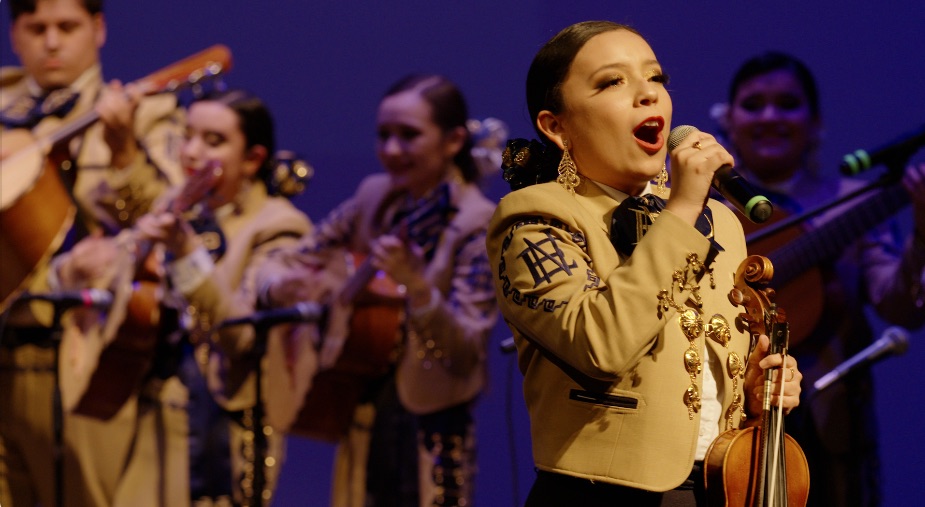 In 2019, while filming a project along the US-Mexico border in Texas, directors Sam Osborn and Alejandra Vasquez came across one of the first fully sanctioned University Interscholastic League State Mariachi Festivals, where high school mariachi bands perform at the same competitive level as students in cheer, football, and marching band. The duo was surprised to hear that within a state so politically entrenched against immigration there was a publicly funded arts program that celebrated traditional Mexican culture. Osborn and Vasquez, who are both Mexican American, immediately knew that the subject was ripe material for a documentary. Eventually they found Edinburg North High School’s Mariachi Oro, who opened their doors and allowed the directors to capture a year in the life of a varsity mariachi squad. The result is “Going Varsity in Mariachi.” A 104 minute competition documentary seeking distribution at Sundance.

“We came to understand that we wanted to make a film centered on an experience that millions of first, second, and third generation Mexican Americans have, which is characterized best by the phrase “ni de aqui, ni de alla,” of being from neither here nor there,” the directing duo said in a joint statement. “It’s a feeling that we have both felt growing up in families that pull from a hodge-podge of their Mexican and American roots. We wanted to show that the world of competitive high school mariachi represents a concerted effort by a borderlands Latine community to respond to this question of cultural identity and offer its young people some measure of solid footing–to show them the beauty, thrills, and joy of their heritage, and to assure them that they belong.”

Ahead of the docu’s Sundance premiere on January 22, Variety spoke to Osborn and Vasquez.

You originally made a short documentary for Pop-Up Magazine about Edinburg North High School’s mariachi band. Why did you decide to then make a feature doc?

Vasquez: We loved the community, the coach and the kids so much that we wanted to make a feature.

Osborn: We also recognized in the team that they weren’t totally focused on championships and that the coach was going after something a little more holistic, which we thought was more interesting than a team that was about just winning the state trophy.

Was it a long process to gain access to the high school and its mariachi band?

Osborn: Most of the kids from the short film we had made graduated, but the kids we wanted to film had seen the short and were really excited about it. But it still took some convincing. We spent a lot of time speaking with parents and the coach. There was a meeting between the coach, parents, and the administration ahead of us filming just to make sure the parents wanted to be involved and no one felt trapped in a documentary they didn’t want to be part of.

In the beginning of the doc, the Mariachi Oro is struggling big time. Did that make you nervous since you were making a competition docu?

Vasquez: The team historically has always been in the top third, second or first. But we knew when we were filming that this was a comeback year for the kids because Covid had decimated the team. A lot of these kids were in school as sophomores and now they were seniors who didn’t get that extra year of playing music. That said, I don’t think we realized how bad they were going to be. It made us very nervous, honestly. At one point we weren’t even sure if they were going to qualify for the state championship and then it was like, What is this movie?

Osborn: It was rough in the beginning. At that point we thought we were going to make a movie about the art of losing gracefully.

How did you fund the doc?

Vasquez: Osmosis Films put up development funding in early 2021. With their support we ended up filming for a week. We filmed auditions and we made a sizzle and a deck and then we went out to pitch. And then pretty early on Luis A. Miranda, Jr. from Embeleco Unlimited came on board and he had a relationship with Fifth Season. So, then Fifth Season came on board and then Impact Partners came on in early 2022.

Impact helps fund social issue docs, so would you describe this as a social issue-competition docu?

Vasquez: It’s a coming-of-age music competition doc. We tell these different stories that reveal what the kids are going through outside of school, but through the music.

Osborn: There’s border politics inherent in all of these people’s stories, but we didn’t want to foreground it in a really clumpy way. We realized that the existence of the team is political in itself.