Get The Skyrim Library Book Set At A Massive Discount

The Skyrim Library book set is over half off at $36 instead of $105 at Amazon. To get this price, make sure to click on the coupon box. The new discounted price will appear at checkout. The set consists of The Skyrim Library Book I, Book II, and Book III–all wrapped up in a hardcover box.

For those who love Skyrim, The Skyrim Library volumes compile in-game texts and include beautiful illustrations–ranging from items to character art. Book I is called The Histories, Book II is Man, Mer, and Best, and Book III is The Arcane.

If you’re not getting it yourself, the Skyrim Library book set will make a perfect holiday gift for any major Skyrim fan in your life.

Elder Scrolls V: Skyrim originally released in 2011 and received an Anniversary Edition in 2021. It’s on PC, Xbox, and PlayStation, and Nintendo Switch. Elder Scrolls VI, the sequel, has been highly anticipated for many years. It will be an Xbox and PC exclusive. 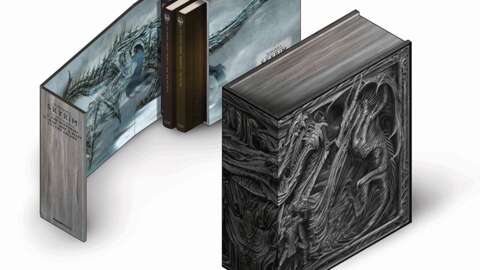