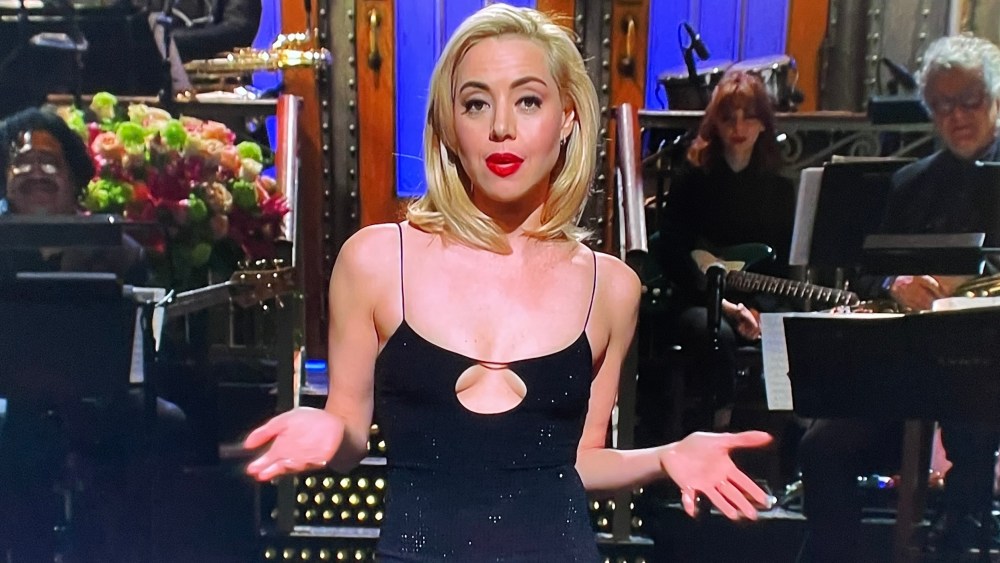 “Wow, it is great to be here hosting ‘Saturday Night Live.’ This is a dream come true and yes I mean that,” she said.

“People think I’m weird because of the characters that I play,” she said. “My real family is here including my Grandma Margie. They all came up here from Delaware. I was voted most famous person from Delaware, I beat Joe Biden.”

“That’s a fact and he was pissed, he was livid,” she said.

The President then appeared, saying, “Aubrey, you’re the most famous person out of Deleware and there’s no question about that. We’re just grateful you made it out of ‘White Lotus’ alive.”

“When I was in college I worked here as an NBC page,” she said, adding that her duties were giving “tours around the building.”

Donning a page jacket, she gave a tour of “Historic studio 8,” and talking about her reputation as a “bad page” with “terrible phone etiquette.”

“I see you are wearing your page jacket,” said Poehler. “Are you drinking again?”

Other cameos included Tony Hawk and the Property Brothers.

“I’m sort of the real Bo Jackson, and I’m proud to be first African American quarterback to ever dunk a football,” he said.

Yang continued with the exaggerations, declaring, “Now allow me to give you my real stats: Death drops, 26. Duck walks, 19. Wigs snatched, infinity. …And I was also given the award for tightest tuck.”

Later on during “Weekend Update,” Poehler and Plaza reprised their roles as Leslie Knope and April Ludgate on “Parks and Recreation.”

In addition to the many cameos, actress Sharon Stone made a cameo lounging on a couch during a performance by musical guest, Sam Smith with a choir. Smith was also joined by Kim Petras for “Unholy.”

Watch the cold open below: