Epic Games has announced the Fortnite Naruto Rivals skins, adding another quartet of characters from the iconic anime to the game on June 23.

Itachi Uchiha, Gaara, Orochimaru, and Hinata Hyuga will be dropping into the Fortnite item shop in two separate bundles: one themed around Itachi and Orochimaru, the other around Gaara and Hinata.

The Itachi and Orochimaru bundle will contain the following items:

The Gaara and Hinata bundle includes the items below:

A third Ninja Gear bundle will also be available, which will include:

To celebrate the release of the new skins, Epic Games has also announced the return of the Hidden Leaf Village adventure map as well as the Nindo Community Challenge. Hidden Leaf Village allows players to visit iconic locations from Naruto while earning XP for completing quests. The Nindo Community Challenge, meanwhile, adds quests to standard gameplay that will allow players to unlock the Akatsuki Wrap and the Manda Glider without having to purchase them.

The Naruto Rivals skin set drops into the game on the same week as the Fortnite 21.10 patch, which sees Darth Vader and his Stormtroopers invade certain locations on the map and challenge all players who dare to enter his chosen domain. 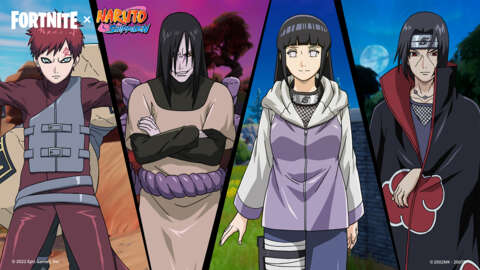