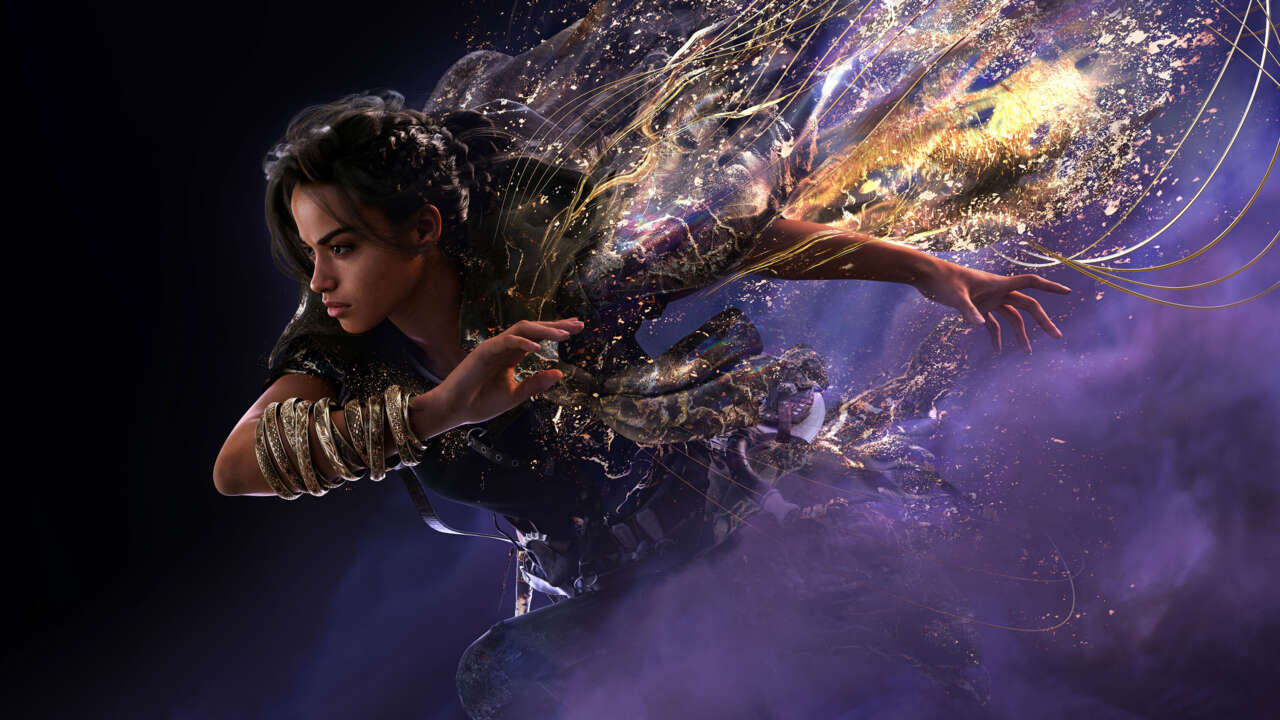 Though it takes inspiration from isekai–stories in which people from Earth are transported to and become trapped in a fantastical world (think Alice in Wonderland but Japanese)–Forspoken ultimately doesn’t understand what makes that genre so popular. Instead, it tells a largely forgettable story that sets up major stakes but fails to offer a compelling reason for why the player should care. Luminous Productions’ action-RPG feels great when it allows you to really stretch your legs and magically parkour across its fantasy landscape, but combat is clunky and regular exposition too often stalls the action.

In Forspoken, protagonist Frey finds herself trapped in the magic-filled world of Atheia after stumbling through a portal. There, she bonds with a sentient brace she nicknames Cuff and then encounters a group of survivors living in the last city that’s free from the effects of a dangerous miasma. This blight, which Frey calls the Break, covers the land and transforms living creatures into mutated monsters. Frey is the only exception, making her an ideal candidate for exploring the Break, finding its source, and destroying it. The whole situation is an intriguing narrative set-up but boring or unlikable characters let it down. It’s difficult to like the standoffish and stubborn Frey, the incessantly sarcastic Cuff (who regularly quips in Frey’s ear like a discount JARVIS), or any of the survivors who are all too eager to completely rely on Frey’s protection from the Break while also asking her to complete boring optional tasks like going on a tour of a lifeless hub or petting a bunch of sheep.

Forspoken’s story is one about belonging–finding a place you want to stay and a people you wish to protect. Like any isekai protagonist worth their salt, Frey is initially resistant to her new surroundings before discovering that she’s actually ideally suited to the world she’s found herself trapped in. However, it’s not a world that the game is able to adequately convince the player of wanting to stay in and protect. The emotional connection Forspoken tries to establish to incentivize the player to take action–to help the people that need Frey’s help–is deeply uninteresting and oftentimes head-scratching and odd. The characters don’t take the threat of Atheia’s imminent destruction very seriously and any tension that comes from their perilous existence is repeatedly undermined by meaningless busywork they want you to do. The characters themselves are also incredibly plain with two-dimensional personalities. They have no real convictions or anything interesting to say.

The facial expressions of the people in Atheia are stilted and uncomfortable, which already creates a bit of a disconnect with the emotional core of Forspoken’s story. But the issue is exasperated by how these people are characterized and used to inspire Frey. We see Frey contemplate murderous vengeance over the death of a survivor she’d only just met, and feel guilty over belittling someone she has the slimmest of connections to. These people aren’t fleshed out in Forspoken’s story, and so the way they emotionally manipulate Frey isn’t all that believable or fulfilling to watch. My playthrough was filled with me constantly asking, “Yes, but why should Frey care?” and Forspoken never delivered a satisfying answer to the question.

With not much keeping you within the last bastion of human life in Atheia, you’re encouraged to go out and explore the wider world, sprinting over fields with Frey’s parkour abilities and blasting enemies away with explosive magic. Frey zips through the environment with stylish flips and jumps, moving so quickly that she skids to a halt. This does create an enjoyable fluidity to movement and it’s exhilarating to feel the world speed past you. Still, the lack of precision makes platforming or levels within enclosed spaces frustratingly difficult. More than a few times, I found myself accidentally jetting past an item I wanted to pick up, or unintentionally racing up the wall of a building. Technically, you can instantly shut off Frey’s magical parkour by pressing the button that puts her into a normal sprint–apparently, the two actions cancel each other out because using them both at once causes Frey to come to an abrupt halt. It’s an awkward workaround to the problem, however, and not one easy to pull off in the midst of a fight.

Whereas Forspoken’s movement mechanics encourage a wilder, freeform style of engaging with the world, combat pushes you toward precision. There’s a precise timing needed to pull off dodges and parries, and several of Frey’s magic spells lend themselves to careful placement and strategic use–that’s difficult to do when racing around the environment. As a result, Forspoken feels disjointed as the moments of exploration and navigation come into conflict with combat. Instead of complementing each other, these two parts of the game are actively fighting one another. They never come together into a cohesive whole.

Frey can let loose a wide variety of bombastic spells and magical abilities, all of which are visually impressive displays. She can crush enemies with massive boulders, engulf whole groups in a molten eruption, or fry everything around her with brilliant green lightning. It all looks very cool, but there’s not much in the way of strategy to it. Cuff can inform Frey what flavor of her magic is most effective against a particular enemy, and then all you have to do is switch to that element and keep tossing out attacks. Early into the game, you encounter enemy types that encourage you to think a bit beyond that–enemies who can block magic from the front or foes who can’t be damaged until you destroy their wings, for example–but they only really appear in the first quarter of the story. After that, most enemies are bullet sponges designed to create challenge in how much of a magical beating they can take. It’s not hard to switch magic types to mindlessly exploit weaknesses and so combat–though visually impressive–quickly loses all sense of enjoyment.

Forspoken’s movement is far more fun, especially in the latter half of the game when you start unlocking and chaining new mechanics that increase the variety of ways that Frey can journey across Atheia, like slingshotting herself through the air with a flaming whip or manipulating gravity to skate across the water. Even if there’s nowhere interesting to go in Forspoken–its open world is dotted with an assortment of run-of-the-mill side quests like time-limited parkour challenges and photo ops–there’s fun to be had in the act of simply getting to your next main story mission. The quiet hum of Forspoken’s excellent soundtrack worms its way into your ears while you’re racing through the empty, yet beautiful, landscapes. I’m absentmindedly humming its main theme even now.

Exposition regularly cuts into the experience, however. Frey and Cuff quip a lot, and though Cuff does have a few humorous one-liners and insightful commentary on the world of Atheia over the course of the story, Frey…does not. Frey is one of the weakest parts of Forspoken. Her characterization resembles the narrative arc of ’90s and early 2000s isekai light novels, manga, and anime, which largely focused on female protagonists becoming trapped in another world. There, they’d discover their innate talents translated into power, which they’d wield in a quest that awarded them personal agency and self-confidence. But Frey deviates from these isekai protagonists. She’s inherently unlikable for most of Forspoken’s story, with the game forcing her through her transformation from selfish sorcerer to defiant hero over the course of a single chapter of lengthy exposition. I didn’t buy into her heroic shift in the final moments of the game–it felt like the storyline was going through the motions without taking the necessary steps to ensure Frey’s emotional and mental development made sense.

As a character, Frey feels flat. Our introduction to her is seeing her on the wrong side of a criminal court case, and that she views the world around her with jaded exasperation–she pushes people away because she’s an abandoned orphan and believes no one wants her. Frey carries that disposition throughout most of the game and it’s the primary means by which she views every aspect of Atheia, and thus we the player are able to see it. Forspoken doesn’t do anything to celebrate Frey as someone who is Black or a woman or anything else about her. The game posits that the only perspective worth noting from Frey is that of an orphan and that restriction not only stunts the character growth she can achieve, it also just gets stale after a few hours.

Forspoken is a tricky game to recommend. The lore of its world is interesting but delivered in a stilted expository manner, and the freeing sensation of taking off across the landscape in a magically-propelled sprint is sullied by the knowledge that there’s nowhere to go or anything fun to do. Combat is visually impressive but not all that engaging, and the excellent sound design and the catchy musical score are regularly undermined by unfunny quips from an unlikable protagonist. I enjoyed parts of it, but too often my fun was dragged to an unrewarding halt.