FIFA, Qatar and Cowardly Hypocrisy Has Sucked the Joy Out of Watching the World Cup 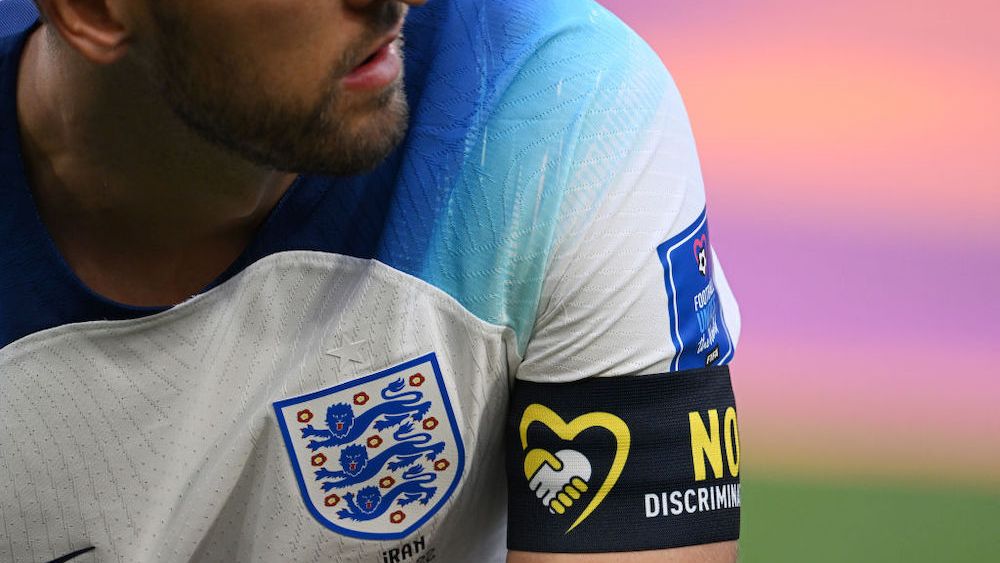 As I set my alarm to make sure I’d be up in time for Monday’s World Cup match between England and Iran, I felt nothing but a simmering dread. It didn’t especially matter what the score was (a 6-2 victory for England). The highest stakes drama of this year’s World Cup had already been playing out for months in the leadup to the kickoff in Qatar, and looks set to boil over despite FIFA’s most aggressive efforts to quell it into silence.

Every four years, the World Cup is supposed to — as one of FIFA’s approved hashtags puts it —#UnitetheWorld. And it has, in a way. Millions of fans are now all too aware of the sickening combination of corruption and compliance that’s made this year’s event one of the most controversial in recent memory, with Qatar luring all too easily manipulated FIFA officials into giving the country a whitewashing all the oil money in the world couldn’t previously buy. Despite celebrities like David Beckham taking reportedly jaw-dropping paydays to promote the good clean fun of the World Cup, journalists on the ground have found anything but. Despite FIFA’s assurances that LGBTQ fans shouldn’t worry for their safety in a country where homosexuality is illegal and viciously punished, team captains were forbidden from wearing the rainbow armbands that might demonstrate the most basic level of support. Despite Qatar’s insistence otherwise, reports have maintained that building the enormous football stadiums cost thousands of migrant workers’ lives.

Even if you’re not intimately aware of all the ways in which FIFA has taken advantage of its position as arguably the most powerful sporting organization in the world — as recently outlined in the damning Netflix documentary “FIFA Uncovered” — this might not be altogether shocking. Sport has indeed been one of the world’s great uniters, giving people the chance to let their active brains rest for as long as a game goes on and cheer for a player, team or country in a way that makes them feel like part of a collective. It’s no coincidence that I personally fell hard for the Premier League in 2020 when most of the world was still shut down. Picking a team and tuning in every week wasn’t just fun; it was a ritual that connected me to other people when connection felt like an endangered species. There’s something incredibly elemental about that in a way that surprises me still.

So for all of you who might be reading this only to roll your eyes and tell me that I’d be better off turning off my brain more completely to just enjoy the football: you’re right! I’m sure I’d be much happier shutting up and forgetting everything I know about how sinister the forces behind this tournament truly are. A few hours before England vs. Iran game kicked off, though, a one-two punch courtesy of both teams ensured that I can’t.

On Sunday night, Iranian captain Ehsan Hajsafi took the time in his pre-match press conference to send a message back to those at home amid the ongoing protests sparked by the death of Mahsa Amini, a 22- year-old beaten to death by the Iranian “morality police.” Calmly, resolutely, Hajsafi said, “in the name of God, creator of rainbows…I want to say condolences to all the grieving families in Iran. We want them to know we are with them, and by their side, and share their pain.” Here, Hajsafi uses the words of Kian Pirfalak, a 10-year-old Iranian boy who loved engineering and once dedicated one of his boats to “the God of rainbows” before, per his parents, Iranian officials shot and killed him in the street. What might seem to American eyes as the most basic of sympathies is, in fact, an incredible show of solidarity expressed in the most reverent terms. As Iran’s government continues to try and squash the uprising by throwing anyone who dares speak up in prison, where they await trials that will almost certainly end in the harshest of punishments, Hajsafi took a bold risk that he knows could result in the same for him, famous footballer or no. The next day, he and the rest of the team doubled down, greeting the Iranian national anthem playing before the match with a grim, determined silence instead of the blind loyalty the government demands.

Meanwhile, in the hours between Hajsafi’s press conference and kick-off, a quorum of European countries that had otherwise resisted FIFA’s orders to ditch their “One Love” campaign caved. They will dutifully drop the rainbow armbands that were meant to explicitly demonstrate solidarity with LGBTQ+ fans in favor of FIFA’s approved armband choices, including such milquetoast and asinine phrases as “no discrimination” (against whom?), “share the meal” (what) and “bring the moves” (…). To explain their frantic backpedaling, the Football Association delegations from England, Denmark, Wales, Belgium, Switzerland, Germany, and the Netherlands released a statement expressing their disappointment in FIFA’s inflexibility, concluding they couldn’t put the players “in a position” to suffer “sanctions including bookings [i.e. yellow cards].”

In truth, the countries were putting the players in another terrible position of having to decide whether or not they would become a face of defiance as the institutions around them bowed to pressure. But they did have a decision to make themselves, and they decided to follow in the institutions’ footsteps. They toned their message down to suit the very authorities they were supposed to be protesting in the first place. That would’ve been disappointing enough on its own, but when contrasted by the Iranian team’s dangerous show of solidarity, it became downright infuriating. Once again, FIFA and the temptation of just shutting up and enjoying the game won out.

It’s not fair that any of these players should have to consider the global implications of their every move when fulfilling their lifelong dream of playing a World Cup. It’s not fair that their fans should have to keep track of myriad human rights atrocities when coming together to celebrate long-awaited victory. None of this is fair or right or the least bit enjoyable. But the more FIFA, Qatar and everyone else reaping the material benefits of this blood-drenched tournament tell us to just sit back and watch the football without question, the more urgent it is that we don’t.