Completing NPC quests is one of the most surefire ways to get your hands on powerful items in Elden Ring. You might have to follow cryptic instructions, solve bizarre riddles, or complete challenging tasks in order to help these characters “fulfill their purpose,” but doing so is almost always made worth your while with the rewards you reap at the end.

Bloody Finger Hunter Yura is no exception. It takes multiple steps to complete his quest–and you might struggle to find him in the first place if you don’t know where to look–but when you do, you’ll be rewarded with Eleonora’s Poleblade, one of the most powerful weapons in the game.

Eleonora’s Poleblade is a unique Twinblade that deals both Physical and Fire Damage, in addition to causing blood loss buildup. It requires 12 Strength, 21 Dexterity, and 19 Arcane to wield, and scales primarily with Dexterity and Arcane.

What makes this weapon so powerful is its unique Skill, Bloodblade Dance. With one L2, you jump forward toward your target and come down in a flurry of slashes. Follow it up with a second input, and you’ll strike again before jumping backward. Not only can this combo easily fill the blood loss meter all on its own, it can quickly close the gap between you and an enemy, and get you back to a safe distance away before they have the chance to recover and counter.

You can find Yura quite early on in the game. Not ever step of his quest is necessary to get your hands on Eleonora’s Poleblade. However, we will walk you through each encounter so you can be sure not to miss any items or dialogue along the way.

You’ll first find Yura just east of the Seaside Ruins Site of Grace in Limgrave, standing next to a fire in the underpass of some ruins. Talk to him, and he will warn you about the Flying Dragon Agheel in the lake to your North.

After defeating the dragon, return to Yura’s location. He will tell you about the Church of Dragon Communion, where you can turn in your dragon hearts in exchange for powerful incantations.

You will next encounter Yura outside of Murkwater Cave, about halfway up the entrenched river running down the center of Limgrave. As you approach the cave’s entrance, you will be invaded by Bloody Finger Nerijus. This fight can be quite tough early on in the game. However, Yura will fortunately come to your aide after about a minute. Just hold off the invader until Yura shows up, and let him finish the fight from there.

With Bloody Finger Nerijus dead, you’ll be rewarded with the Reduvia, a Blood Dagger that scales with Arcane and Dexterity. From there, head north up the river to the Jellyfish-infested tunnel to find Yura, who will explain his mission of hunting Bloody Fingers.

Next, head to the Main Gate Site of Grace at Raya Lucaria Academy. (You will need to get the Glintstone Key–which is guarded by Glintstone Dragon Smarag, in the lake just west of the Academy–in order to access this location). Head north from the Site of Grace, past the magic seal. You will find a red summon sign on ground ahead. Interact with it to enter Yura’s world, and help him defeat Bloody Finger Ravenmount Assassin.

After returning to your world from the fight, you’ll be rewarded with Raptors of Mist, a powerful evasive Ash of War. Talk to Yura on the bridge–he will give you a Smithing Stone 5, and tell you about the deadly Bloody Finger Eleonora that he’s been tracking.

To find Yura at his final location, head to the Second Church of Marika. To get there, you’ll want to start from the Altus Highway Junction Site of Grace, just northeast of the Grand Lift of Dectus. (You’ll need to get both halves of the Dectus Medallion–located at Fort Haight in Limgrave, and Fort Faroth in Caelid, respectively–in order to access this area). From there, continue north up the main road until you pass the map fragment location. Look off the ledge to your left, and you should see the church steeple down below. Carefully make your way down, and be ready to fight the Rotten Strays patrolling the perimeter.

When you enter the church, speak to the dying Bloody Finger Hunter Yura on the ground. He will explain that he was no match for Eleonora, and give you his Nagakiba, a Bleed Katana that scales primarily with Dexterity. Immediately after, you will be invaded by Eleonora, Violet Bloody Finger herself.

Luckily, the fight is straight forward enough. Look out for her Poleblade combos, and beware of her Dragon Communion Incantations. You can also use the church pillars to shield yourself from the majority of her attacks. Stay patient, only attack when there’s an opening, and you should be able to take her down in no time.

With Eleonora defeated, you’ll be rewarded Eleonora’s Poleblade, as well as the Purifying Crystal Tear, which can be used to negate the deadly curse in the fight against Mohg, Lord of Blood. 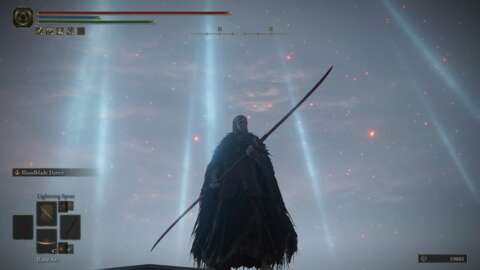