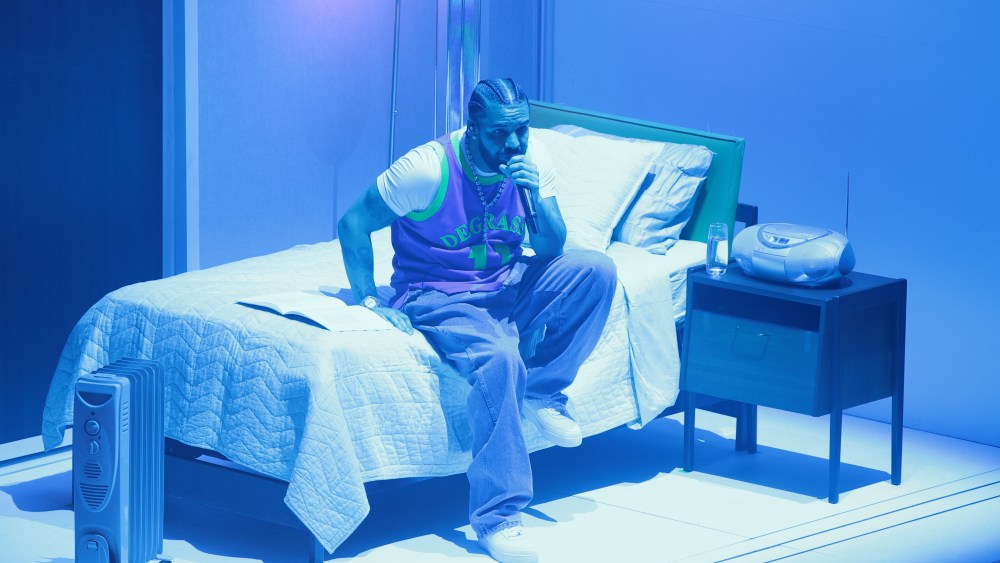 Drake’s second concert for SiriusXM at Harlem’s Apollo Theater on Sunday was halted after a fan fell from the venue’s mezzanine balcony into the audience below.

According to Insider and other reports, the incident occurred around 90 minutes into the show, just after 21 Savage joined Drake onstage to perform songs from their collaborative album. Before they could begin performing, a man fell from the second floor into the orchestra pit, disengaging some of the venue’s lighting.

A crew member ran onstage and asked the rappers to delay the show. “Just gotta make sure somebody’s OK,” Drake told the audience. The concert paused for around 15 minutes while security and other venue staff were seen treating the man and removing the damaged lighting rig.

An announcer then said that no one had been injured in the incident.

“Everybody is absolutely OK,” a man said over the loudspeaker. “They are being checked on. Nobody’s hurt. But I got even better news for you: We’re at the Apollo so the show must go on.”

Reps for the Apollo and SiriusXM did not immediately respond to Variety’s requests for comment.

Drake and Savage then resumed the show, performing songs from their 2022 dual album, “Her Loss.”

“Let’s just make some noise that everybody’s OK,” Drake said in between tracks, adding, “I feel like they had to wait like 10 minutes, we should go up a little more.”

Like many special SiriusXM concerts at the Apollo, this one was a special, career-retrospective concert for the headlining artist, which in the past have included Paul McCartney, Lady Gaga, U2, Bruce Springsteen and others. Variety reviewed the first night of the two-show stand.

At the end of the show, he said, “This crowd is an absolute 10 out of 10. I’m so happy with tonight. We apologize for the delays and all that shit, but thank you,” he said, calling it “an evening of gratitude.”