Droves of baseball fans eschewed early bedtimes Tuesday night to head out to Dodger Stadium to pay homage to Vin Scully hours after the legend died — building a makeshift memorial for the former broadcaster while mourning his passing.

Several people lit candles and dropped off trinkets at L.A.’s ballpark — which, fittingly, sits on Vin Scully Ave. — well into the early morning hours of Wednesday. 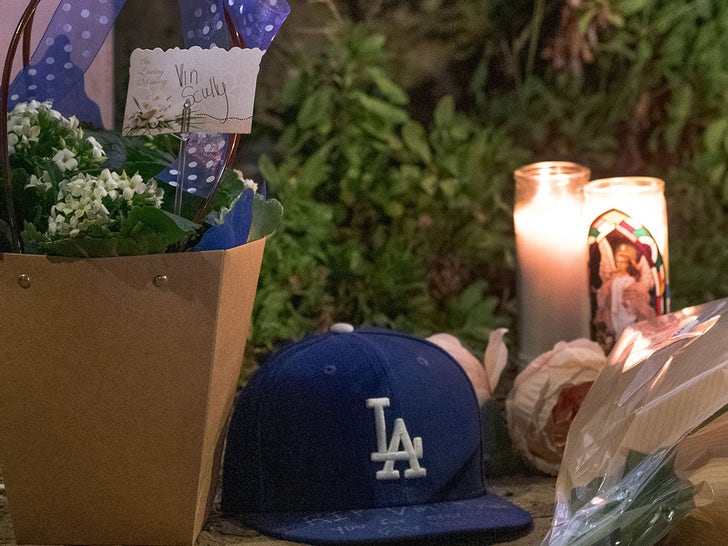 Fans wrote notes, hugged each other … and even cried — as they remembered Scully, who passed away at 94 years old at his Hidden Hills home earlier Tuesday.

Others around the globe took to social media to pay tribute to the longtime voice of the Dodgers — LeBron James wrote a sweet note on his Twitter page, while Magic Johnson also tweeted out an emotional message about Scully as well.

“Vin was the nicest & sweetest man outside of the booth & was beloved by all of our Dodgers family,” Johnson said.

“He was just as popular as any Dodger player. His legacy will live on throughout Major League Baseball & he will be remembered as the greatest announcer ever in MLB history. Cookie and I are praying for the entire Scully family and Dodgers fans all around the world.”

Dodgers ace Clayton Kershaw also called Vin “the best there ever was” following L.A.’s win over the Giants in San Francisco.

“He was the best there ever was. Just when you think about the Dodgers, there’s a lot of history here and a lot of people who have come through, it’s just a storied franchise all the way around. But it almost starts with Vin, honestly.” @ClaytonKersh22 on Vin Scully’s legacy. pic.twitter.com/tbZxACr3lO

Scully, who began broadcasting Dodgers games in 1950, called nearly every one of the franchise’s greatest moments up until his retirement in 2016. He’s widely considered to be one of the greatest broadcasters of all time.