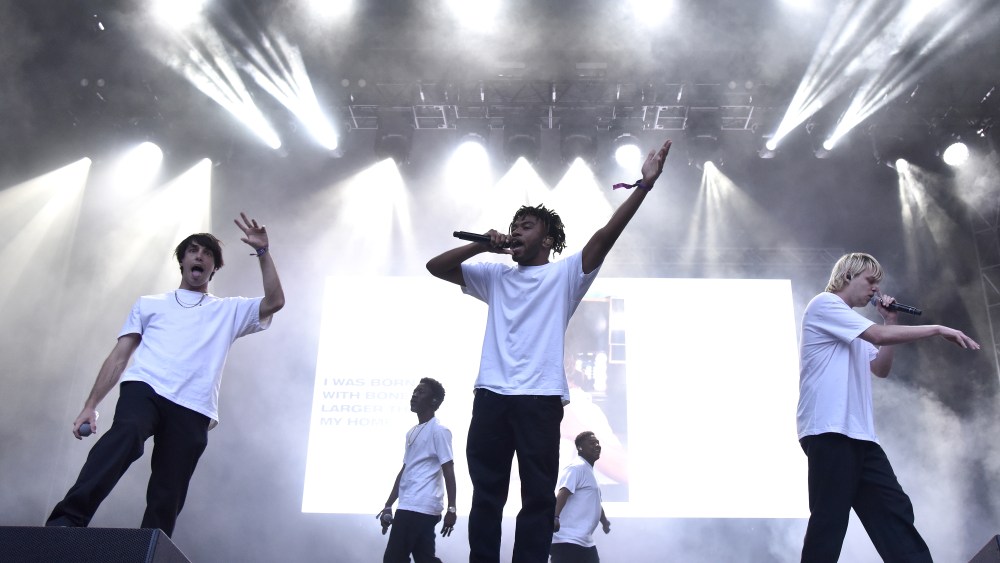 Like many breakups after a dozen-year-long relationship, the circumstances that led toward the indefinite hiatus of Brockhampton, the Internet-raised hip-hop boy band masterminded by Kevin Abstract, were difficult and emotional. But five minutes into their farewell show at the Los Angeles Fonda Theatre on Saturday, it was hard not to think they could’ve kept rocking out for another 12 years.

For some brief context: the group announced their indefinite hiatus at the top of 2022, canceling a planned tour and setting their “final” group performances for April’s Coachella, in which they took a bow upon its conclusion. Brockhampton promised one final album, “The Family,” before the group disbanded, which arrived on November 17 and largely focuses on Abstract, with him reminiscing on the band’s good times while also dishing on the complicated feelings that led to its end.

Opening the show with Céline Dion’s “All By Myself” blaring through the Fonda’s speakers, Abstract fittingly emerged alone to perform “Big Pussy,” the final album’s rumbling lead single, in which he remarks on the “tragedy” of the group being over. Getting the track’s cathartic lyrics off his chest, the crowd immediately geared into a state of hysteria as the rest of the group — Merlyn Wood, Matt Champion, Dom McLennon, Joba, Bearface and Jabari Manwa — rushed the stage to collectively kick off their final show with the hard-thumping “Bump.”

The set list that followed was a comprehensive run-through of the group’s eight-album discography, including a hefty helping of cuts from its 2017 “Saturation” trilogy that, at the time, anointed them as the next big thing in alternative hip-hop. During the band’s prolific run, they’ve garnered praise, respect and even collaboration from the likes of Tyler, the Creator and Dua Lipa — both of whom were in the crowd supporting the group during its farewell gig. And true to its Internet-based roots, Abstract also solicited set list help from the group’s passionate fanbase, which presumably led to the inclusion of discography deep cuts like unreleased tracks “NST” and “Baby Bull.”

What the nearly two-hour show spotlighted was the group’s multi-faceted capacity to give audiences an array of flavors across the hip-hop spectrum — they were able to seamlessly jump back and forth between frenzied, crowd-jumping cuts like “Star” and “New Orleans” while maintaining a calmer, relaxed energy during tracks like the introspective piano ballad “Tonya” and their R&B-tinged hit “Sugar.”

And the communal feeling of sentimentality centered around Brockhampton’s farewell show manifested in various forms throughout the night. The group brought a dedicated fan, dressed in an orange jumpsuit that visually defined the band’s “Saturation” era, onstage to hang for a handful of songs, receiving hugs and daps from various group members. A mid-show group introduction led by Merlyn Wood turned into a group-wide “shoutouts” segment, giving thanks to all the players — producers, managers, etc. — that made Brockhampton possible.

The group capped the show with a two-song encore: Bearface reappeared solo to do the affecting “Saturation II” R&B jam “Summer,” before the group came together one last time to jump — literally — to “Boogie,” with McLennon ending the song on a stage dive. It was fitting that the lasting image of the group’s final performance was one of them collectively and emphatically jumping around with the same anarchic energy that carried them into hip-hop stardom in 2017.

Before walking offstage final time, Abstract somberly told the crowd: “Thank you very much, thanks for everything. See you guys when we see you.”