Bono Recalls His Mother’s Unexpected Death — and How the Loss Turned Him to Music: ‘We Rarely Thought of Her Again’

Bono sang for his mother only once in public before her death in 1974. In an excerpt shared from his upcoming memoir Surrender, out Nov. 1, the musician, who has spent the past few decades of his life on stage, recalled how his mother’s death ultimately pushed him into becoming a rockstar.

In the chapter titled “Iris (Hold Me Close),” named after the U2 song inspired by his mother, Bono recalled the day his mother unexpectedly died of a brain aneurysm – the same cause of death shared by two of her five sisters – when he was 14 years old. Iris had collapsed at her own father’s funeral and later died at the hospital.

“[Bono’s brother] Norman and I are brought into the hospital to say goodbye. She’s alive but barely. The local clergyman Sydney Laing, whose daughter I’m dating, is here,” he wrote. “Ruth is outside the hospital room, wailing, with my father, whose eyes have less life in them than my mother’s. I enter the room at war with the universe, but Iris looks peaceful. It’s hard to figure that a large part of her has already left. We hold her hand.”

Looking back, Bono said he got most of his musical talent from his father. In fact, his mother was not aware of his musical interest. In one particular memory, he recalled the shock on his mother’s face when she heard him sing for the firs time. “Dressed up in one of my mother’s white trouser suits with some silvery sequins glued on, I curled my lip and brought the house down. Iris laughed and laughed. She seemed surprised that I could sing, that I was musical,” Bono remembered of a time he played the Pharaoh in Andrew Lloyd Webber’s musical Joseph and the Amazing Technicolor Dreamcoat. 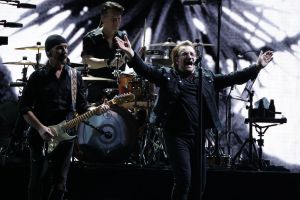 Bono also didn’t have a piano at home, though remembered that he was transfixed by the instrument whenever he came across it at their church hall in Ireland. He said he pleaded with his family to take the one his grandmother was selling, but his mother insisted he had “no interest in singing.”

“I was born with melodies in my head, and I was looking for a way to hear them in the world,” Bono explained. “Iris wasn’t looking for those kinds of signs in me, so she didn’t see them.”

But music stayed with him, and after his mother’s death, the singer likened the subsequent shift in energy at home to an opera, writing: “The subject of the opera is the absence of a woman called Iris, and the music swells to stay the silence that envelops the house and the three men—one of whom is just a boy.”

He said his brother taught him how to play the guitar. “With his guidance, I learned to play “If I Had a Hammer” and “Blowin’ in the Wind.” I worked out how to play “I Want to Hold Your Hand,” “Dear Prudence,” and “Here Comes the Sun” on my brother’s guitar.”

While music helped Bono heal from the loss of his mother, he said his family was never quite the same after her death.

“I have very few memories of my mother, Iris. Neither does my older brother, Norman. The simple explanation is that, in our house, after she died, she was never spoken of again,” he wrote. “I fear it was worse than that. That we rarely thought of her again. We were three Irish men, and we avoided the pain that we knew would come from thinking and speaking about her.”

“Iris” is one of 40 songs that make up the structure of Surrender, which tells the story of Bono’s life through the progression of his discography as frontman of U2. Each chapter is named after a different song by the Irish rock band, but the title itself holds just as much importance.

“Surrender is a word freighted with meaning for me,” Bono shared in a statement. “Growing up in Ireland in the Seventies with my fists up (musically speaking), it was not a natural concept. A word I only circled until I gathered my thoughts for the book. I am still grappling with this most humbling of commands.”