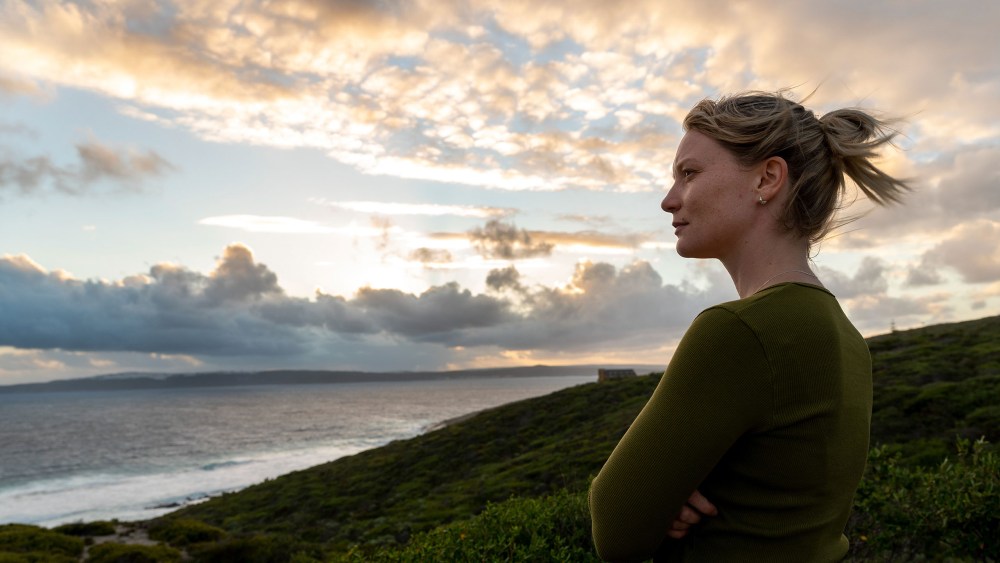 Following on the heels of international hit “The Dry,” veteran Australian director Robert Connelly has tackled another local literary adaptation in “Blueback,” based on his celebrated compatriot Tim Winton’s 1997 novella. That slender tome (subtitled “A Contemporary Fable”) was aimed primarily at younger readers. The film adopts a somewhat more grownup, realistic, less parabolic tenor, though its ecology-minded narrative remains a bit sketchy for feature treatment — resulting in a pleasant, very handsome-looking movie rather short on dramatic impact.

Nonetheless, it’s got more than enough significant plusses to offer, from an appealing cast led by Mia Wasikowska and Radha Mitchell to much spectacularly inviting underwater photography. Having already played a few other fests in advance of its Sundance showcase (and opened commercially in a few territories), it is slated for U.S. theatrical release by Quiver Distribution on Feb. 24, with VOD following April 21.

Abby Jackson (Wasikowska) is a marine biologist working on a seafaring lab, her diving skills useful in gauging the health of life on the ocean’s floor. That work gets interrupted when a call informs that her mother Dora (Elizabeth Alexander) has suffered a stroke. She flies home to Western Australia and extracts a dazed, mute Dora from a care facility, hoping familiar environs will help restore her speech and memory.

All this certainly stirs Abby’s own memories, which occupy the majority of the runtime here in chronologically ordered flashbacks. They start with her 8th birthday, when (as played by Ariel Donoghue) she’s deemed old enough by a 30-ish Dora (Mitchell) to hazard diving in “the deepest part of the bay.” The girl is skittish at first, then exultant — particularly after the thrill of encountering a giant blue groper about twice her size.

She’s initially alarmed when the fish snatches an abalone from her hand. Then, curious, she hand-feeds it another. She dubs her googly-eyed, big-lipped new friend “Blueback,” promising her mom to keep this discovery a secret, lest it be targeted by the poachers that frequent these waters.

Such illegal fishing is a major concern for Dora, who is not afraid to confront those harvesting protected species, or the local tycoon (Erik Thomson) pressuring her to make way for a luxury housing development. She passes those environmental-activist values to her daughter, though as an average teen (then played by Ilsa Fogg) with other interests, Abby sometimes incurs her very single-minded, quick-tempered mother’s wrath. Among those interests are cute classmate Briggs (Pedrea Jackson, with Clarence Ryan as the adult version), as well as the doings of disreputable, boozy but harmless fisherman Macka (a glorified cameo for Eric Bana, buried under scruffy facial hair), who provides a partial substitute for the father who died when Abby was a babe.

Connolly’s script (with Winton credited for “additional writing”) expands and alters various aspects of the source material — starting with Abby, who in the book is a boy named Abel. The flashback structure is workable enough, but if little happens in the present tense (as our heroine tries to restore her afflicted mother’s sense of self), not quite enough happens in the past, either. Well-cast subsidiary figures don’t get much character development, while what conflicts there are in the episodic progress sputter out pretty quickly. “Blueback” underlines its own indifference to dramatic urgency by having all three of the narrative’s significant deaths take place offscreen. It also feels a bit vague in tenor, being likely to strike adult viewers as somewhat innocuous and simplified, yet with a little too much grownup psychological discord to spellbind the under-12s — despite its slot in Sundance’s Kids program.

Even so, it all goes down easily, with editor Nick Meyers’ pace never growing slack despite a general laid-back vibe. DP Andrew Commis’ widescreen photography of the Bremer Bay and surrounding Great Southern Region locations is quite appealing, but is secondary to the real treat here: numerous sequences of aquatic life shot by principal underwater cinematographer Rick Rifici and four others, with the actors appearing to do most of their own diving.

On land, Mitchell manages the most with her role, making Dora a credibly flinty, strong-willed personality not without maternal warmth. As for Blueback, it is about as charming as a fish can be — let alone one that, as per closing tech credits, turns out to be a practical effect rendered by modelers, sculptors and puppeteers.