The engagement didn’t last long for “The Bachelorette’s” Rachel Recchia and Tino Franco! It was revealed on the finale that the pair had split after he confessed to cheating on her when they were going through a rough patch.

“Extra’s” Billy Bush spoke to Rachel about Tino’s infidelity, plus former contestant Aven showing up to possibly give things another try! Rachel and fellow Bachelorette Gabby Windey also reacted to Zach Shallcross — who dated Rachel on their season — being the next Bachelor.

Billy asked if Rachel thought Tino’s making out with someone else, was limited to that. Rachel said, “There are so many steps that go into getting to that point. There is texting, there is meeting up at bars, there is being in cars with people as far as what actually transpired we truly, I  don’t think we’ll ever know and I don’t really know if I need to at this point.”

Rachel said of watching Tino’s proposal after the split, “It really was just such a whirlwind that I didn’t even remember what he had said to me so it really was heartbreaking to hear all those promises and knowing how it ended.”

Billy asked if she found Franco’s fight to save her underwhelming? Recchia said, “I don’t really know if I would say there was a fight.” Gabby added, “It was kind of hard to just pinpoint his like motive and intention of being there I couldn’t really grasp where his head’s at. I feel like he kind of changed his mind every five seconds.” 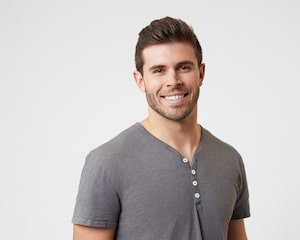 Windey added, “I think he was more concerned with saving himself and like saving his own face than being real and honest and like wanting to work on the relationship with Rachel.”

Bush then asked where Rachel went with Aven after the show. She revealed, “We were able to talk outside and de-mic and be able to have a conversation and it was so nice to obviously see him after having such a hard conversation. Aven’s always been someone that’s just been such a safe space for me so it was just really great to see him and I was obviously very shocked, but happy.”

Are they exploring something now? Recchia said, “We’ll have to wait and see. I think we’ll just take things one step at a time.”

Billy asked what she thought of former suitor Zach being named the new Bachelor. Rachel said, “He’s going to be incredible, so excited for him. We wish him all the best. We can’t wait to watch.”