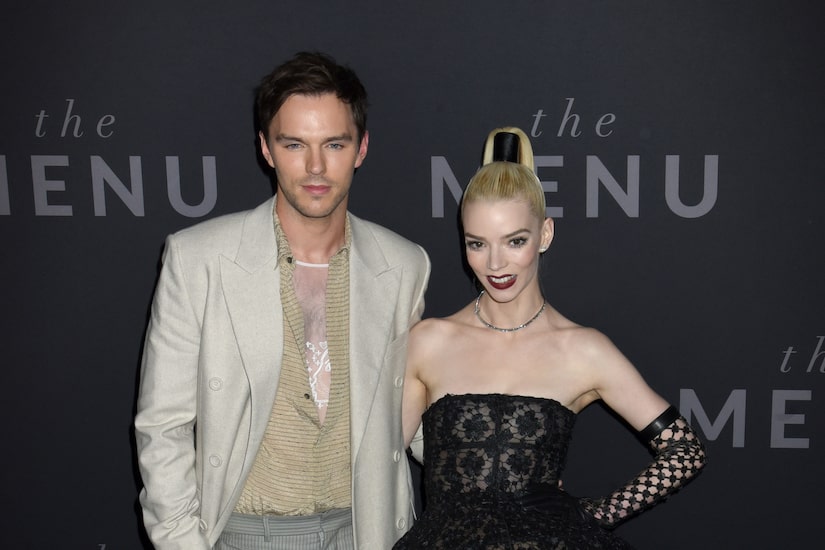 Anya Taylor-Joy and Nicholas Hoult are dishing on their new dark-comedy thriller “The Menu.”

“Extra’s’” Rachel Lindsay spoke with Anya, who also discussed her upcoming role in “Furiosa” and the support she got from Nicholas, who was in “Mad Max: Fury Road.”

Joined by Nicholas, Anya noted, “I missed Nick so much from set… I was always texting him from the rig, being like, ‘Why are you not here? You’re supposed to be here.’”

She went on, “Nick was really, really supportive because we were doing it when I just kind of agreed to doing ‘The Menu.’”

Nicholas commented, “From my standpoint, it was exciting because I got to watch Anya’s method or an approach through this film and our dedication and how purely she looks out for every character in every moment and how she fights for them, so I was like, ‘Oh, this is exciting that this actress who’s so dedicated is going to go play Furiosa.’”

The role required Anya to be familiar with bikes, something that Nicholas likes. She noted, “We share like hobbies, which is exciting.”

As for how they got the tone right for “The Menu,” Nicholas shared, “When we read the script, it was kind of one of those films where you’re like, is this a dark comedy? Is it satire? Is it a horror? There’s so many different elements mashed together for this… The fun thing for us as actors, we’re just kind of trying to play each moment honestly and service the characters in the story.”

Anya and Nicholas “had so much fun” filming — even the shocking scenes! Anya explained, “Everyone was game for anything and everything… We always had an opportunity to improvise… [Director Mark Mylod] wanted us on set all the time and we were always mic’d, so we’re constantly improvising. Even when it was a close-up on another table, we would just sit and stay and watch and applaud because it was fun to have a front-row seat to these incredible performances.”

With Thanksgiving coming up, what are Anya and Nicholas grateful for? Nicholas answered, “I think we’re both grateful that we get to have experiences like making this film and that we get to do what we love creatively.”

Anya added, “I’m really grateful for the people that have come into my life over the last couple of years. I love my art so much, but it just goes to another level when you actually just love the people around you.”

“The Menu” is in theaters now.