15 Years Ago, Burnout Paradise Redefined What An Arcade Racing Game Could Be

Burnout Paradise celebrated its 15-year anniversary this week, on January 22, 2023. Below, we take a look at how the iconic game’s unique approach to arcade racing helped set the standard for years to come.

Most of the time in an arcade racing game, you see a hot rod screeching down the countryside, with a gorgeous vista in the distance–one that’s nothing more than that: a distant setting that you’ll never reach. Instead, you have only a single road to follow, with that distant scene serving as window dressing.

That sort of Hollywood-esque set was the backdrop for the majority of arcade racers, a genre about hopping into a Corvette, flying down the road, and then hopping out a few minutes later. You could play as many races that you wanted to, but the joyride would never go any further than that.

There was a reason for that. Sandboxes are messy and don’t allow for tight design. Arcade racers move incredibly fast–especially with multiplayer–making the combination of the two “ridiculously hard [to develop],” according to former Criterion lead gameplay programmer Iain Angus. “Really, really hard.”

Burnout Paradise, a game where you explore a fictional California town named Paradise City, was all about messing around while making a mess. The horizon was very much in reach when Guns N’ Roses began playing

Criterion’s incredibly popular open-world racer turned 15 on January 22, 2023, and its impact on the genre can still be felt today. Alex Nevarro called Paradise City a “wonderfully executed concept” that hadn’t been seen in Burnout game before in his GameSpot review. It set the stage for racing giants like Need for Speed and Forza Horizon to turn to an open world years later.

Other racers–Test Drive Unlimited laid some groundwork for Paradise, according to Angus–had drivers zoom around open worlds before, but none captured the spirit of the genre like Paradise did. They were often huge worlds filled with little to do, and the driving never quite as impactful as it did when you crashed your Carson GT right into the side of a canyon after turning around one of Paradise City’s sharp corners. The spectacle, oftentimes, was more than enough.

The entire idea for Paradise began as a solution for one of the most common problems players face when jumping into an arcade race: spending too much time in the lobby.

“We realized that people spent five times longer in the lobby than they did actually racing,” said Paradise producer Mark Webster in an interview with The Verge. His team had tracked how players had interacted with Burnout Revenge. “So we said, ‘Well why isn’t this lobby a game world?’ We thought it was a good idea, and it turned out to be a really good idea.”

Paradise City, first and foremost, was designed as a lobby that players could jump in and out of seamlessly while other players sped through other parts of the city.

Criterion found that its idea for an open-world lobby was more popular than the races they designed. 90% of players chose to fly around the Los Angeles-like metropolis without a care in the world. Few queued up to the races or other secluded game modes.

Although it wasn’t the first game to feature one, open worlds had been growing in popularity since Grand Theft Auto III launched in 2001. The sandbox design method is still popular today. Developers are still trying to build new, creative ways to traverse wide landscapes.

Paradise City was the first open world racetrack that felt complete, according to seamless open world was the first that made that style of play work. Many developers used it as inspiration for later games, including DiRT and Need for Speed: Most Wanted.

“I still don’t think anybody has captured the right kind of size of package like Paradise did,” Said DiRT chief game designer Paul Coleman in an interview with Game Developer. “The scale of the city and outlying area felt right for what Paradise was setting out to do. There was something to do at pretty much every junction.”

The sandbox racetrack wasn’t the only design element ahead of its time. A year of free downloadable content was included, which was unheard of for online games in 2008. Many of the design elements shaped the work that Criterion did moving forward as well.

“A lot of the tools and technology that Criterion used in subsequent titles developed then, a lot of behind-the-scenes stuff; telemetry, understanding what all the users are doing, what they’re enjoying, what they’re not, which is how all mobile games are done these days,” Angus said. They’ve all got their analytics and so on so it was an early form of that.”

We’ve only seen one Burnout game in the 15 years since Paradise launched in 2008 and that was a spin-off–Burnout Crash in 2011. The only other time Burnout graced a modern screen was when a remastered version of Paradise launched in 2018. The majority of the team that worked on Paradise has moved on from Criterion, and the company has since worked on other franchises like Need for Speed, Battlefield, and Star Wars Battlefront.

Angus believed that we wouldn’t get another Burnout game in 2014, and he’s been right so far. The innovations that Burnout Paradise introduced have become commonplace in many other open-world racing games, but few games have matched the summer vibe that came with a joy ride down the coast. We may never see a game like Paradise again, but a drive through Paradise City will never feel out of style. 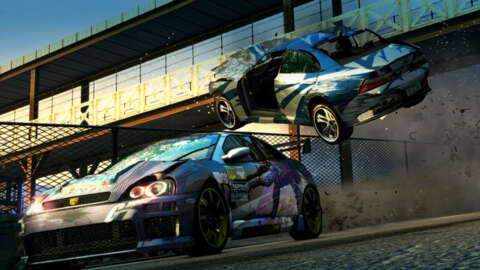